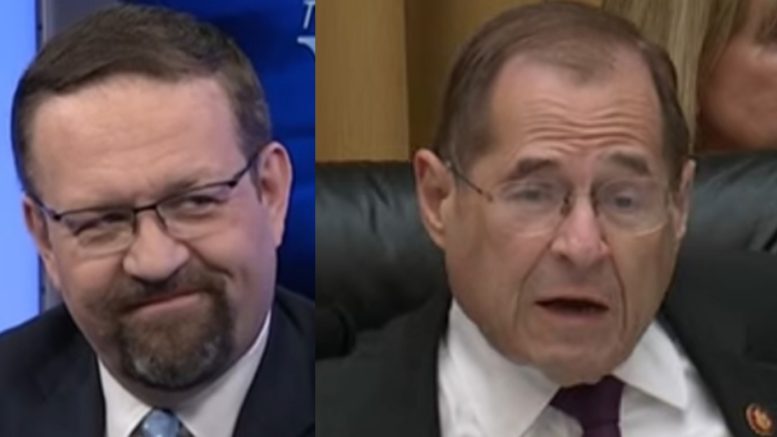 House Judiciary Chairman Jerry Nadler condemned “send her back” chants that could be heard during President Trump’s North Carolina rally, which the President later disavowed.

In a tweet, Nadler said, “Watching the President lie (again) to the American people, spreading racist and xenophobic propaganda against @Ilhan with the crowd being goaded into chants of “send her back” was both chilling and horrifying.”

He added, “There is no place for such racism in our public discourse.”

Trump’s former Deputy Assistant Sebastian Gorka issued a stark reminder to Nadler upon seeing his remarks, where he slammed the Chairman for trying to get him deported soon after the 2016 election.

Gorka brought up Nadler’s 2017 push along with Senator Dick Durbin to get the White House to hand over Gorka’s immigration documents to the House Judiciary Committee.

The move at the time came in response to a report that suggested Gorka may have had ties to a far-right Hungarian group. Nadler wanted the committee to “be assured that he did not enter this country under false pretenses.” Continued Below

“If Sebastian Gorka is indeed a member of this organization, as high-ranking leaders of the organization claim he is, he would have been required to disclose this information on his immigration application, and on his application to be a naturalized U.S. citizen,” Nadler wrote in a letter.

“So when you tried to get me deported because I worked for @realDonaldTrump, that was OK?” Gorka said in a comment back to Nadler.

“You’re a lying piece of putrescent garbage Nadler,” he continued. “And America sees you for what you are.” See Below

So when you tried to get me deported because I worked for @realDonaldTrump, that was OK?

In ending, we leave you with other responses to Nadler, as found by Twitchy:

You and Sen. Dick Durbin formally demanded @SebGorka’s immigration papers from DHS and the White House so you could find a way to deport him, despite the fact that he’s an American citizen. Stop pretending your interest here is anything but partisan. https://t.co/0Rs61z7d5B

When Dick Durbin and Jerry Nadler began a formal citizenship inquiry to threaten Seb Gorka for his political views, I have to be honest that I don't remember the Twitter brigades freaking out about it. The great @davidharsanyi looked into attacks on his citizenship here. https://t.co/sTgsXUJPeq