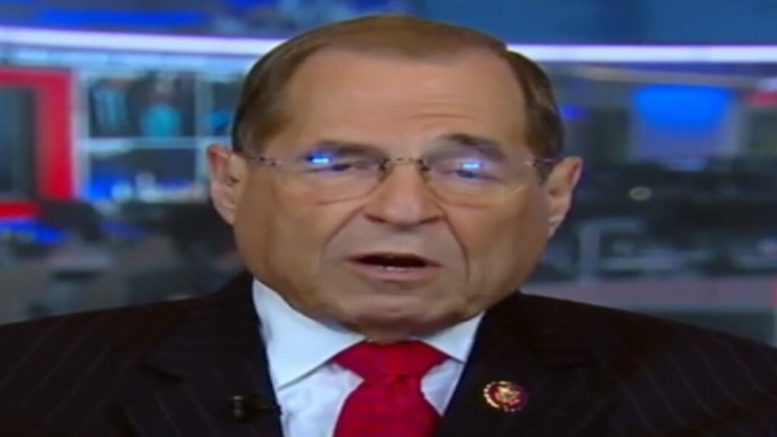 Chairman of the House Judiciary Committee, Jerrold Nadler (D-N.Y.) spoke with host Chris Wallace on “Fox News Sunday” where he discussed what Democrats hope to hear from former special counsel Robert Mueller ahead of his Wednesday testimony.

Mueller will testify before the House Judiciary and Intelligence committees led by Reps. Nadler and Adam Schiff (D-CA).

Former special counsel Robert Mueller made it clear that he doesn’t want to testify and that he would not go “beyond” what he wrote in his report. During his press briefing on May 29th, Mueller said, “We chose those words carefully and the work speaks for itself and the report is my testimony. I would not provide information beyond that, which is already public in any appearance before Congress.”

Asked why he is putting Robert Mueller and the country through this, Rep. Nadler responded, “We want the American people to hear directly from special counsel Mueller what his investigation found. The President and the Attorney General and others have spent the last few months ‘systematically lying’ to the American people about what the investigation found.” [Emphasized].

“They’ve said that it found no collusion, that it found no obstruction, that it exonerated the President… all three of those statements are absolute lies. In fact, it found a great deal of collusion, it found a great deal of obstruction of justice by the President, and it pointed to refuse to exonerate the President,” Nadler claimed. “We think it’s very important for the American people to hear directly what the facts are because this is a President who has violated the law six ways from Sunday.” [Emphasized.]

Wallace asked Nadler what if this whole thing ends up “being a dud”, as Nadler is trying to portray “a movie” setting versus “reading a book”.

“Well, we hope it won’t it won’t be a dud and we’re gonna ask specific questions about ‘look at page 344, paragraph 2, please read it.’ Does that describe obstruction of justice and did you find that the President did that?'” Nadler said he will ask Mueller as an example. (Continued Below)

Wallace then turned the subject to what Republicans may ask of Robert Mueller and pointed to the “corrupt cabal,” of FBI agents, their conduct, and the Steele dossier.

Asked if the Republicans could get more out of the hearing than Democrats, Nadler claimed, “I doubt it because the fact is those charges have been investigated by the Inspector General and have found to be baseless.”

Wallace stopped Nadler in his tracks fired back, “Whoa, whoa, wait! Forgive me, sir. The Inspector-General hasn’t investigated or at least hasn’t come out with his report on the conduct of the Trump investigation.”

According to a new poll, 50% of the American people say Congress should not hold hearings for impeachment and that Trump should finish his term as President. 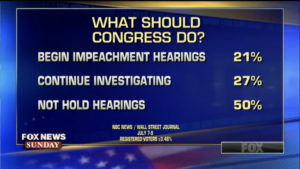 Despite the fact that Democrats voted against impeachment this week, Nadler said, “No, the country has not moved on! The President and the Attorney General have lied to the American people about what was in the Mueller report, about the fact that… the President said there was no collusion, that was not true, that there was no obstruction, that’s not true. And they’ve had months about lying to the American people.”

Then, he claimed “people don’t read,” so they will be able to understand what was in the report after the “words” come out Mueller’s mouth, instead.

“People don’t read a 448-page report. I believe that when people ‘hear’ what was in the Mueller report, then we’ll be able to be in a position to begin holding the President accountable and make this less of a lawless administration,” he said. (Continued Below)

(Related: Nadler Accuses Rep. Gaetz Of ‘Wasting Committee Time’, Gaetz Fires Back: ‘We Will Take No Lecture From You’)