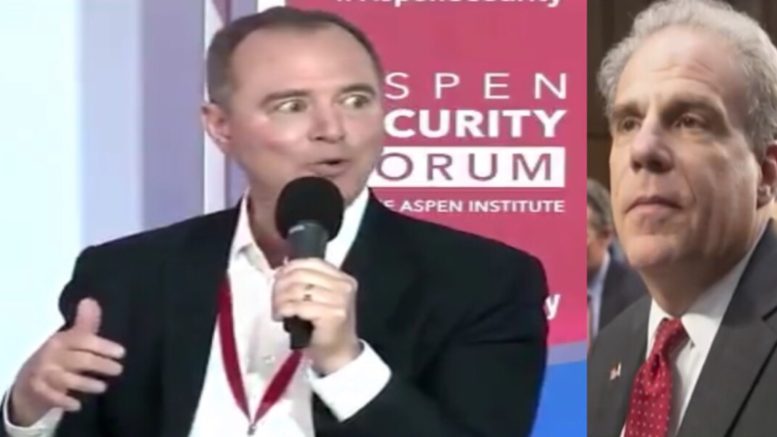 Rep. Adam Schiff (D-CA) claimed over the weekend at the Aspen Security Forum that Justice Department Inspector General Michael Horowitz got “roped into a politically-motivated scheme to protect President Trump”, appearing to lay the foundation to discredit Horowitz’s work as his report nears completion into FISA abuses by Obama’s DOJ and FBI.

Schiff accused top Justice Department officials of pandering to Trump by instigating a “fast track” report last year about former FBI Deputy Director Andrew McCabe. His comments came as part of a broader answer to a question about whether he has concerns about Attorney General William Barr’s review of the origins of the Russia investigation, per Washington Examiner.

Adam Schiff claimed that President Trump wanted McCabe investigated, his pension taken away, and suggested someone such as former Attorney General Rod Rosenstein did it to “please” the President by making a referral.

“The inspector general found that McCabe was untruthful. He may very well have been untruthful,” Schiff said but noted that is not where main his concern lies.

McCabe was fired from the FBI on March 16, 2018, less than two days before he planned to retire and would have been eligible for a lifetime pension, but the Inspector General determined that he had lied about the role he had in leaking information to the Wall Street Journal in October 2016 about the investigation into the Clinton Foundation. (Continued Below)

Adam Schiff immediately tweeted after the termination of Andrew McCabe and claimed, “In the absence of the IG report, it’s impossible to evaluate the merits of this harsh treatment of a 21-year FBI professional. That it comes after the President urged the DOJ to deprive McCabe of his pension, and after his testimony, gives the action an odious taint.”

Then, he suggested, “The President, through his lawyer, called on DOJ to end Mueller probe. Obstruction of justice is no less a threat to our democracy when done in the open than behind closed doors. Every representative should condemn this flagrant abuse of power or stop pretending devotion to duty.” (Continued Below)

Rep. Jim Jordan (R-OH) and Dan Bongino hit back at Schiff on Tuesday after he suggested that the Horowitz probe is ‘tainted’.

Meadows wrote, “Jordan, “Inspector General Horowitz is a professional. He’s conducting a crucial investigation into FBI and DOJ misconduct. But @RepAdamSchiff said his investigation is “tainted.” What’s got Schiff worried?”

Bongino declared, “Sleazy, spineless, Adam Schifty Schiff is absolutely panicking over the soon to be released IG report. It’s glorious to watch this sleazy swamp-rat melt down completely now that he knows he can’t hide his lies and gaslighting anymore.”

Inspector General Horowitz is a professional. He’s conducting a crucial investigation into FBI and DOJ misconduct.

But @RepAdamSchiff said his investigation is “tainted.”

Sleazy, spineless, Adam Schifty Schiff is absolutely panicking over the soon to be released IG report.
It’s glorious to watch this sleazy swamp-rat melt down completely now that he knows he can’t hide his lies and gaslighting anymore.

It is also worth noting, on Sunday Schiff claimed that the President could be indicted after he leaves the White House and called him an “unindicted co-conspirator.”

Adam Schiff says Trump is "essentially an unindicted co-conspirator" in the Cohen case and that SDNY may have to reopen its investigation into campaign finance violations after Trump leaves office, and DOJ "will have to weigh whether to indict the former president."
Via CBS pic.twitter.com/F0MeELuPvc

Adam Schiff should be indicted for unrelenting horse shit https://t.co/NRuEfTIG75

Judicial Watch wants Schiff gone as he can’t be trusted with classified information. Sign the petition to hold him accountable:

Americans need an Intelligence Committee that can be trusted, and Representative #AdamSchiff has proven that he cannot be trusted with classified information. RETWEET if you agree & click HERE: https://t.co/txWWtlNk0Y pic.twitter.com/0VtjmfDlmP

(Related: Schiff Presents Legislation To Make It Illegal To Accept ‘Dirt’ From A Foreign Agent)