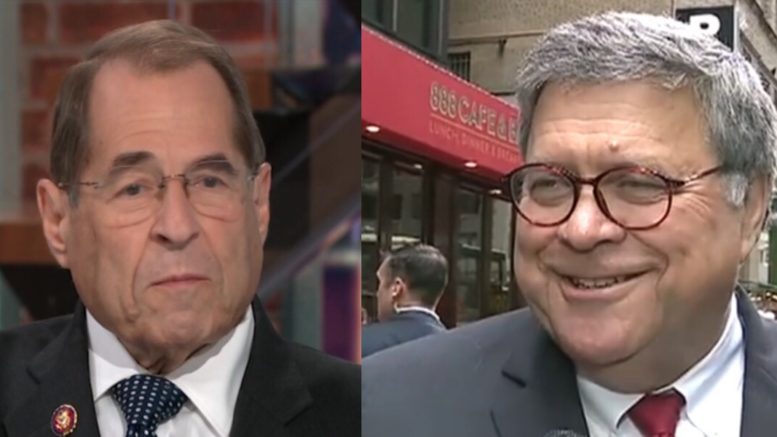 Attorney General William Bill Barr spoke with Fox News briefly on Tuesday and explained that former Special Counsel Robert Mueller’s team asked the Justice Department to send former special counsel Robert Mueller a letter telling him to keep his upcoming testimony “within the boundaries” of the public version of his report.

The DOJ responded Monday night and sent a letter to Mueller telling him that he needs to “stay within the boundaries” of his 448-page report.

House Judiciary Committee Chairman Jerry Nadler (D-NY) called the letter “incredibly arrogant” and that Mueller “does not have to comply with the DOJ letter,” in an interview Tuesday on CNN.

Asked by Fox News why the Monday letter was sent, Barr said Mueller’s staff asked the department for guidance ahead of the hearing.

“At his press conference, Bob had said that he intended to stick with the public report and not go beyond that,” Barr said. “And in conversations with the department, his staff was reiterating that that was their position and they asked us for guidance in writing to explain or to tell them our position was. So we responded in writing. The department sent the guidance that they requested.”

Asked directly if it was Mueller who asked for the letter, Barr responded, “Yes.” (Continued Below)

The DOJ letter said, “Should you testify, the Department understands that testimony regarding the work of the Special Counsel’s Office will be governed by the terms you outlined on May 29 — specifically, that the information you discuss during your testimony appears in, and does ‘not go beyond,’ the public version of your March 22, 2019 report to the Attorney General or your May 29 public statement.

The Attorney General also hit back at Nadler on Tuesday after he called the letter “incredibly arrogant” for trying to “instruct” Mueller what to say.

“He was misinformed as to the facts,” Barr said. (Continued Below)

(Related: Nadler Claims Trump Is ‘Guilty Of High Crimes & Misdemeanors’: ‘[He] Has Violated The Law Six Ways From Sunday’)