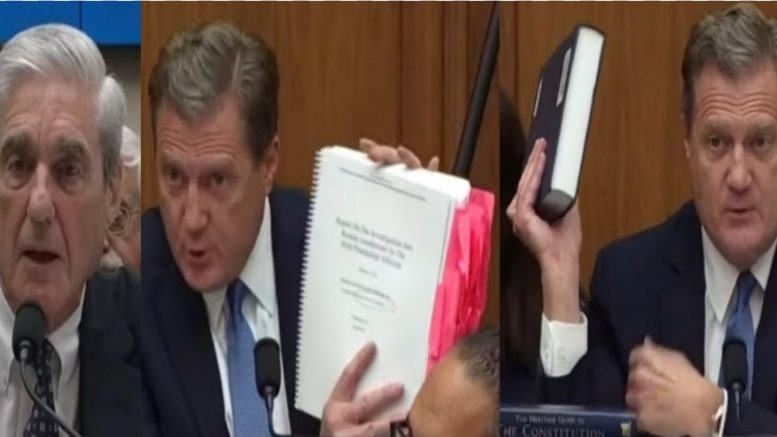 Turner made it clear that the DOJ cannot “exonerate” the President, nor does Mueller have such power.

Turner explained that he wanted to focus on one word in Mueller’s report. “It’s the second to the last word in the report. It’s ‘exonerate.’ The report states accordingly, ‘while this report does not conclude that the President committed a crime, it does not ‘exonerate’ him. In the Judiciary hearing, your prior testimony– you’ve already agreed with Mr. Ratcliffe that exonerate is ‘not a legal term,'” Turner said.

“So, I have a question for you, Mr. Muller. Does the Attorney General have the power or authority to exonerate?” he asked as he proceeded to stack legal books on the Dias. “What I’m putting up here is the United States code. This is where the Attorney General gets his power and the Constitution, and the annotated cases of these, which we searched. We even went to your law school, because I went to Case Western. I thought maybe your law school teaches it differently. We got the criminal law textbook from your law school.” (Continued Below)

Turner proceeded to explain that he had the books scanned. “Mr. Mueller, nowhere in these [books] is there a process or description on ‘exonerate.’ There’s no office on ‘exoneration’ at the Attorney General’s office. There’s no certificate at the bottom of his desk. Mr. Mueller, would agree with me that the Attorney General does not have the power to exonerate?” he asked.

“You would not disagree with me when I say that there is no place that the Attorney General has the power to exonerate and he’s not been given that authority?” Turner asked. (Continued Below)

Mueller would not answer that either.

Mueller said, “No, we included in the report for exactly that reason. [Barr] may not know it, and he should know it.”

“So, you believe that the Attorney General, Bill Barr, believes that somewhere in the hallways of Department of Justice there’s an office of ‘exoneration?” Turner asked of Mueller.

“No, that’s not what I said,” Mueller responded. (Continued Below)

“And this is my concern, Mr. Mueller,” he added pointing to a display behind him showing a picture of CNN and their headline. “This is the headline on all of the news channels while you were testifying today. ‘Mueller: Trump was not exonerated.’ Now, Mr. Mueller what you know is that this can’t say ‘Mueller exonerated Trump.’ [Be]cause you don’t have the power or authority to exonerate Trump. You have no more power to declare him exonerated than you have the power to declare him– than Anderson Cooper [of CNN].”

“So, the problem that I have here is, that there’s no one in the criminal justice system that has that power. The President pardons, he doesn’t exonerate. Courts and juries don’t declare innocent, they declare ‘not guilty.’ They don’t even declare exoneration. The statement about exoneration is ‘misleading’ and it’s ‘meaningless.’ It colors this investigation [with] one word out of the entire portion of your report, and it’s a meaningless word that has no legal meaning,” he concluded. (Video Below)