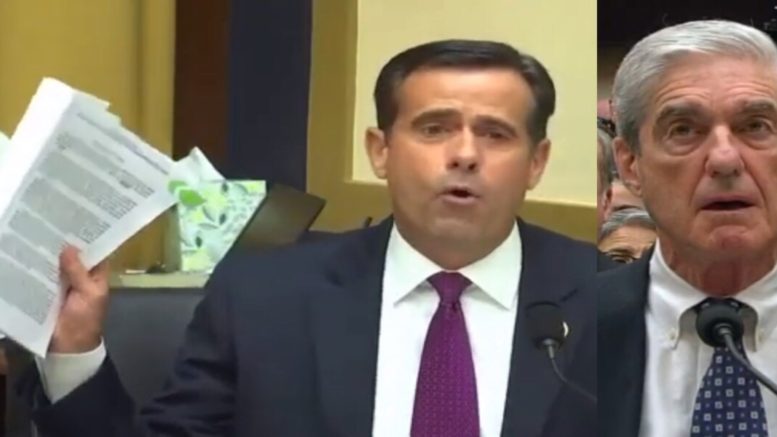 While testifying on Capitol Hill, former special counsel Robert Mueller was grilled by Rep. John Ratcliffe (R-TX) for his report findings on alleged obstruction of justice by President Trump.

Rep. Ratcliffe asked Mueller during his testimony to identify which Justice Department policy “set forth a legal standard that an investigated person is not exonerated if their innocence from criminal conduct is not conclusively determined.” Ratcliffe raised a concern about Mueller’s report saying that while the probe did not establish Trump committed a crime, it also did not exonerate him.

“Can you give an example other than Donald Trump where the Justice Department determined an investigated person was not exonerated because their innocence was not conclusively determined?” Ratcliffe asked.

Mueller claimed, “I cannot, but this is a unique situation.”

Ratcliffe fired off, “Okay, well you can’t–time is short, I got five minutes, let’s leave it at you can’t find it because– I’ll tell you why, it doesn’t exist!” [Emphasized] (Continued Below)

He declared that the obstruction section of the report “was not authorized under the law to be written– it was written under a legal standard that does not exist at the Justice Department.” [Emphasized] (Continued Below)

“I agree with Chairman Nadler this morning when he said Donald Trump is not above the law,” Ratcliffe announced. “But he damn sure should not be below the law which is where Volume II of this report puts him!”