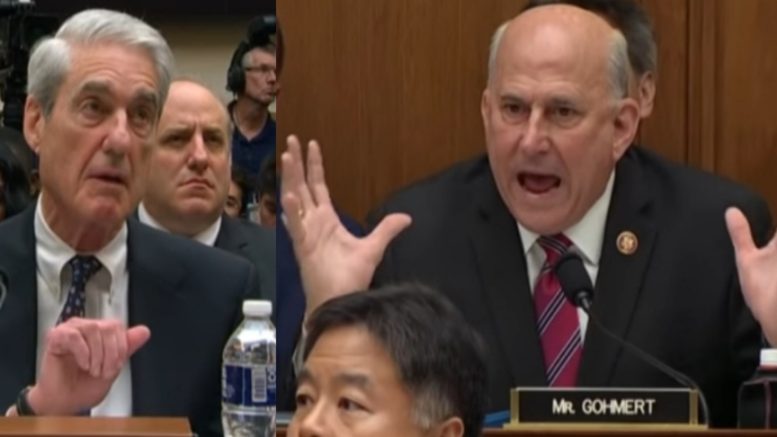 During Wednesday’s hearing, Congressman Louie Gohmert gave Robert Mueller an earful and then some as he made the case for how President Trump did not commit obstruction during the Russia investigation.

Citing his report, Mueller stated that him and his team did not decide to rule on whether or not Trump committed obstruction, and agreed with Chairman Nadler earlier in the hearing that Trump is not necessarily exonerated of such charges.

Gohmert asked Mueller when he was aware of former team member Peter Strzok’s “hatred” of President Trump, which Mueller replied that it was right before he decided to boot Strzok from the team.

Aside from Strzok, Gohmert pointed out how the possibility that at least a dozen of the members who remained on Mueller’s team may have also had hatred of the President.

Referring to Mueller’s own words on obstruction, Gohmert said, “You also note in the report that an element of any of those obstructions you referenced requires a corrupt state of mind, correct?”

After Mueller agreed, Gohmert said, “And if somebody knows they did not conspire with anybody from Russia to effect the election, and they see the big Justice Department with people that hate that person coming after them.”

“And then a Special Counsel appointed who hires dozen or more people that hate that person — and he knows he’s innocent,” Gohmert continued. “He’s not corruptly acting in order to see that justice is done.”

Related Article: While Being Grilled By Collins, Mueller Gets Caught Contradicting His Own Report: ‘Are You Contradicting Your Report?’

“What he’s doing is not obstructing justice, he is pursuing justice! And the fact that you ran it out two years means you perpetuated injustice!” Gohmert defiantly declared. Video Below