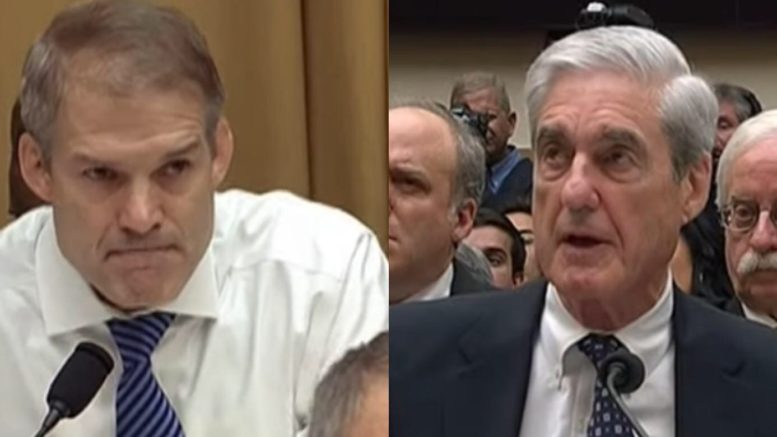 Former special counsel Robert Mueller dodged and refused to answer questions during the House Judiciary Committee hearing Wednesday about Joseph Mifsud, the mysterious Maltese professor accused of lying to the FBI in the special counsel’s report.

Mueller’s report identified Mifsud as having ties to Russian nationals and said that he lied in FBI interviews in February 2017 about his interactions in 2016 with Trump campaign adviser George Papadopoulos.

Papadopoulos pleaded guilty on Oct. 5, 2017, to lying to the FBI about his own interactions with Mifsud, but conveniently, Joseph Misfud escaped charges for lying.

“Why didn’t you charge him with a crime?” Jordan pressed Mueller.

“I can’t get into internal deliberations with regard who would or would not be charged,” Mueller said. (Continued Below)

“You charged a lot of other people for making false statements,” Jordan said. “Let’s remember this: In 2016, the FBI did something they probably haven’t done before. They spied on 2 American citizens associated with a presidential campaign: George Papadopolous and Carter Page. With Carter Page they went to the FISA court. They used the now-famous dossier as part of the reason they were able to get the warrant and spy on Carter Page for a better part of a year.”

“With Mr. Papadopolous, they didn’t go to the court, they used human sources. The FBI even sent a lady posing as somebody else [and] went by the name Azra Turk. They dispatched her to London to spy on Mr. Papadopolous. In one of these meetings, Mr. Papadopolous is talking to a foreign diplomat, and he tells the diplomat Russians have ‘dirt’ on Clinton. That diplomat then contacts the FBI, and the FBI opens an investigation based on that fact. You point this out on page 1of the report,” Jordan explained.

“July 31, 2016, they open the investigation based on that piece of information.” Jordan continued. “Papodopolous tells a diplomat Russians have dirt on Clinton, diplomat tells the FBI. What I’m wondering is, who told Papodopolous? How’d he find out?” Jordan asked. (Continued Below)

Mueller claimed, “I can’t get into that.”

“The guy who puts this country through this whole saga… starts it all… for 3 years we’ve lived this now, he lies and you guys don’t charge him! And I’m curious as to why,” Jordan wondered.

“The FBI interviews him in February… when the special counsel’s office interviewed Misfud, did he lie to guys too?” Jordan asked.

“Cant’ get into that,” Mueller claimed.

“Did you interview Mifsud?” Jordan asked.

“Can’t get into that,” Mueller again claimed.

“Can’t get into that,” Mueller again dodged another question. (Continued Below)

“I’m reading from your report,” Jordan continued after Mueller said he didn’t agree with his characterizations. “In your report, Misfud told Papadopolous. Papadopolous tells the diplomat. The diplomat tells the FBI. The FBI opens the investigation on July 31, 2016, and here we are 3 years later. The central figure who launches it all lies to us and you guys don’t hunt him down and interview him again and you don’t charge him with a crime.

“Here’s the good news: the president was falsely accused of conspiracy. The FBI does a 10-month investigation and James Comey… when we diposed him a year ago, told us at that point they had nothing. You do a 22-month investigation. In that 22 months, you find no conspiracy, and what’s the Democrats want to do? They want to keep investigating. Maybe a better course of action is to figure out how the false accusations started!” Jordan declared.

“Maybe it’s to go back and find out why Joesph Misfud was lying to the FBI. Here’s the good news: that’s exactly what Bill Barr is doing! And thank goodness for that. That’s exactly what the Attorney General and John Durham are doing. They’re gonna find out why we went through this 3-year saga and get to the bottom of!” He concluded. (Video Below)