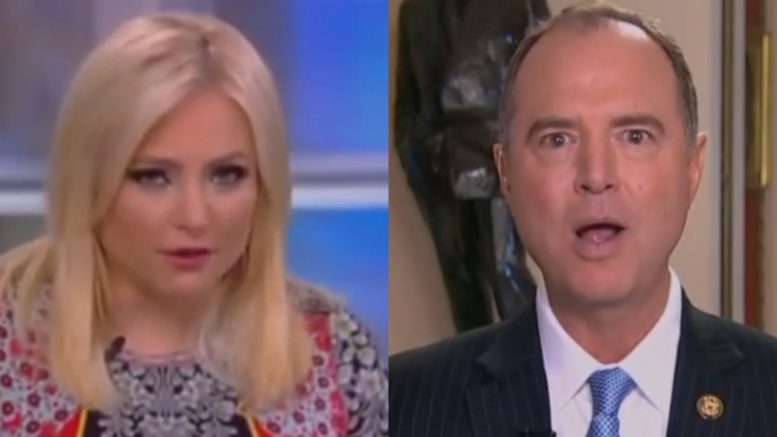 For years, House Intel Chairman, Adam Schiff, has been saying that there is direct evidence of Trump/Russia collision “in plain sight.” Yet, he has never gone into detail what the evidence entails.

On Thursday, Meghan McCain of The View, finally got Schiff to reveal his “smoking gun” of evidence of Trump/Russia collusion in wake of Robert Mueller’s Congressional testimony.

McCain asked, “Can you share with us right here, right now on The View, the evidence that you have and explain why Mueller was wrong yesterday?”

Schiff maintained that the evidence is “in plain sight” and that Democrats, with the help of Mueller, “went through that evidence” during Wednesday’s Congressional hearing.

Schiff said, “The Russians offered dirt on Hillary Clinton in writing and sent it to DonJr. And Don Jr.’s response was in writing and said, ‘As for your offer of foreign illegal help, I would love it.’ He accepted the offer.”

“You have an offer of illegal help, you have acceptance of that offer, you have an overact and furtherance of that conspiracy,” Schiff continued. “That is I think by any rational American’s expectation the personification of collusion.” Video Below

He went on to say, “There is a difference between what we understand is collusion and whether you can prove all the elements of a crime.”

Schiff then suggested that his “object” of having Mueller testify was not to help bring Democrats closer to impeachment, but to find out what work Mueller did and conclusions he drew during his investigation. This, according to Schiff, will help Democrats figure out how to pursue their investigations moving forward.

Finally, when asked if Mueller’s hearing brought him closer to an impeachment inquiry, Schiff replied, “I don’t know.” Video Below