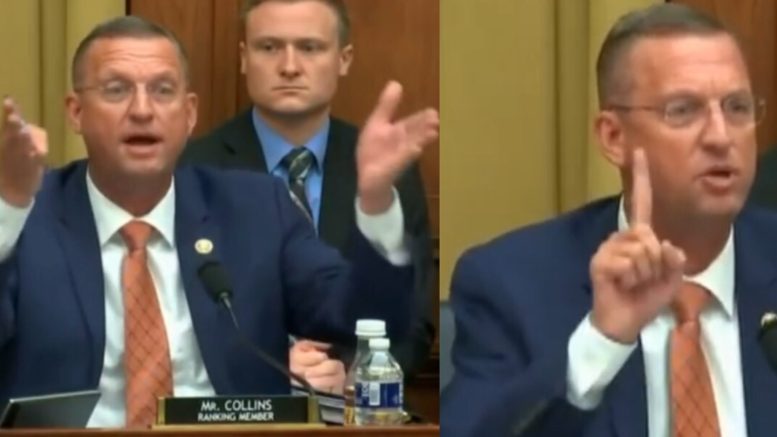 Collins tossed his “prepared opening statement” and called on the majority to “put a bill forward”, instead of attacking the President to get a “press release.”

Rep. Collins dreadingly read off of his prepared remarks and described the situation at the southern border, including child trafficking and apprehensions.

Collins threw his pen down and threw his hands up. “Look, I’m gonna stop. I’m not going to read this,” he said frustrated. “You know what is dehumanizing– is continuing to bring the same witnesses, the same people from the same agencies, to talk about this over, and over and over again.”

He noted that his Democratic colleagues have ideas and that he may disagree with the ideas, but declared, “Put a bill up! I have a bill, put mine up! Make amendments to it, do whatever you want to do. That’s what Congress is supposed to do. Dehumanizing is this! This is dehumanizing,” he declared. [Emphasized.] (Continued Below)

“And also, what a competent, capable majority would do is actually put a bill forward. Instead, we’re not a competent and capable majority undoubtedly using the words of the ranking member of the sub-committee. We’re not capable and competent because we’re not putting bills forward. We’re having ‘bash the president time, bash the administration time!’ This is all it was, this is all it is,” Collins exclaimed.

He thanked the witnesses for being there today but added that he could read another opening statement, ask questions of the witnesses, and bash the administration for not being competent and capable, however, argued that it falls back on Congress.

Collins said, “It falls back on this committee. Why has the majority not put a bill forward? We’ve heard that it doesn’t work, we’ve heard from both administrations– the Obama administration and the Trump administration that laws need to be fixed and worked on. But, we don’t do it. We passed a bill last week that was a bandaid to fix a little bit of a problem.” (Continued Below)

“What is dehumanizing is this hearing. People are gonna come– and the folks in this audience, I’m glad you’re here. We’re trying to work on a problem, but don’t accept another hearing, accept some answers! Accept some bills being put forward. Don’t be fooled again! If you want to take part in a political positioning paper, then that’s what we’re doing today. Because, no offense to our witnesses, we’ve heard you’re statements, already before. So, I don’t know what’s going to move us this time that didn’t move us last time,” Rep. Collins said.

“This is becoming, unfortunately, a committee of press releases. That’s it! Dehumanizing is taking people you say you care about, but doing nothing for them!” he argued. “That’s dehumanizing. Competent and capable? The last time I understood Congress should pass legislation. I’ll be very slow… ‘pass bills that matter. Don’t have hearings that are simply stunts!’ the Georgia Congressman urged.

“Here we go, the popcorn machine is ready if anyone wants some. It’s in the office over here. The show begins,” he concluded. (Video Below)