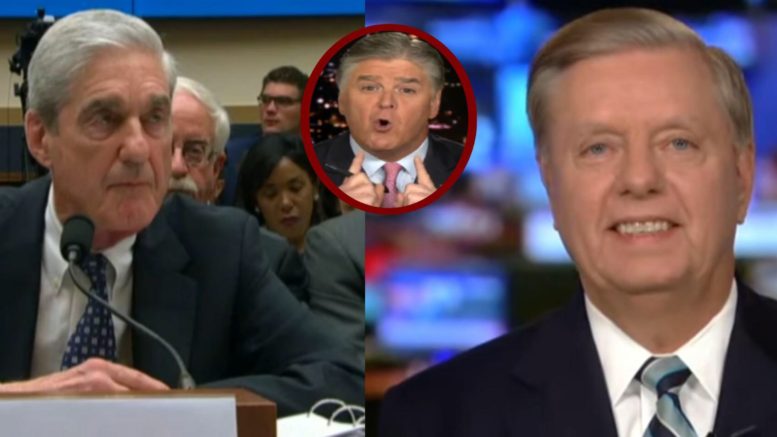 He also issued a statement on Wednesday: “After today’s hearing — and for the good of the country — I hope this is the end of the #MuellerReport. Now it’s time to find out how this debacle started and went so far.”

Senator Lindsey Graham said that he is “more determined today after this hearing to get to the bottom of it” when asked if Hillary Clinton will get away with a fixed investigation after she committed crimes, along with people who lied to FISA court, people that tried to influence a presidential election and people that tried to undo the election.

“The question is: Did Hillary get let off because the people investigating her wanted her to win and Trump to lose? Was the reason that she wasn’t prosecuted because of a political decision, political motivations? All of these things are very important,” he said.

Graham believes Mueller’s team wrote the report and that he should not have testified.

“The one thing I can tell you after today, the Mueller report is in ‘name only.’ I had more to do with the Mueller report than probably he did. [Do] you know what bothers me a lot? People around Bob Mueller knew he was in a weakened state. This guy served in Vietnam, got wounded, did a lot of great things for the country. He should not have been called,” Graham said. [Emphasized] (Continued Below)

Hannity agreed with Graham and said that Attorney General Barr knew that if Robert Mueller testified, it would be a spectacle.

“Seems like the only person that understood and tried to prevent it was the one that was being accused of trying to rig it. The Attorney General knew that this would be a disaster for Mueller. The people that allowed this, that used him– the politicians on that committee and the people on that group that hired and did all this… and he knew nothing and ran the show without him… they’re the ones that did this to reputation,” Hannity explained.

“The hatred for Trump knows no boundaries. They used this man and one of the reasons I told people early on I was not gonna call Mueller is because the report speaks for itself,” Graham responded. (Continued Below)

Graham also said that he was asked for 3 months “why don’t you want to call Mueller” to testify.

“I bet you nobody will ask me that tomorrow. A letter was sent to me by every Democrat on the Judiciary Committee in the Senate,” he admitted.

“Here’s what I can say: Donald Trump is stronger tonight than any time in his presidency. The need to find out what happened is greater today than it was before. It’s clear that Bob Mueller was not in charge of this investigation. And like every American who cares about the rule of law, we need to find out how this started and why it went on so long,” Graham added.

“Their time is coming. The President has gone through hell for two and a half years and nobody else could’ve taken it but him. He’s tough as nails. But those who engaged in the FISA court abuse, and I think fraud, it’s their time. And the only way you’ll ever stop this in the future is to make people pay a price who did it today,” he concluded. (Video Below)

After today’s hearing — and for the good of the country — I hope this is the end of the #MuellerReport.

Now it’s time to find out how this debacle started and went so far.