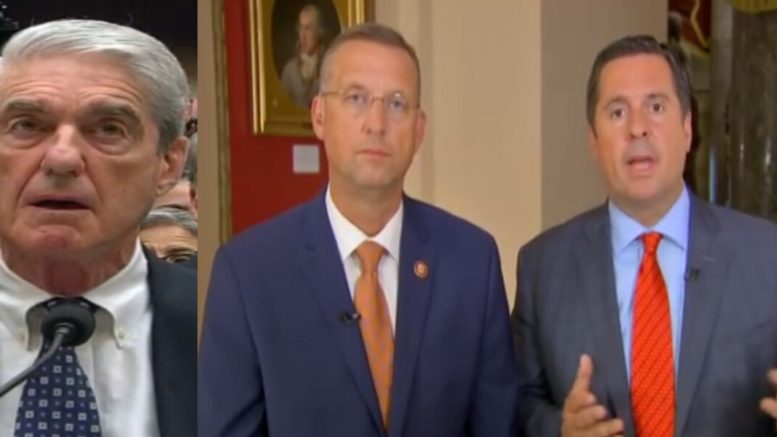 They weighed in on the issues revealed by the testimony, and the behind-the-schemes maneuvers of the Democrats on both committees.

Rep. Devin Nunes said before Mueller’s hearing, “I fear what’s going on right now is that Mueller’s working with a lot of his staff who are backchanneling to the Democrats. And so, it is very possible that Mueller is going to have a few little sound bites that are going to give the Democrats exactly what they want.”

Asked if he thinks that still may have happened, “Yeah, I do. I think they were working with the Democrats. I think when you look at Mueller’s team, we still don’t know how that got put together and that was one of the things Mr. Mueller didn’t ask about. I think what we didn’t expect, is that Mr. Mueller didn’t seem to know a whole lot about the report.”

He added, “There was definitely backchanneling going on and I think the big problem was, I think, that they finally figured that Mr. Mueller was going to talk about this office of legal counsel issue that happened in Mr. Collins committee. And, that was problematic, and luckily, somebody got to Mr. Mueller during the break and he had to come out and correct it during our committee.”

Nunes was referring to when Rep. Ted Leui questioned Mueller about OLC indictment as a major moment from the hearing, but Mueller later clarified his position. (Continued Below)

Rep. Doug Collins agreed that Mueller didn’t give Democrats what they were hoping for. “The House on the Judiciary Committee, I think they’re so delusional about what they wanted the Mueller report to say and what it didn’t say and then they tried to convince themselves of a new narrative since then,” he said.

He added that Wednesday was not a “watershed moment” because “Mr. Mueller was honest. In fact, here [are] two things that came out of it. Number one, the collusion and conspiracy, we put that to rest. Those are one and the same, so any Democrat, such as the Chairman of Intel, Mr. Schiff, who said, ‘there’s collusion in plain sight,’ even some of my member on Judiciary, that’s just a false narrative to lie to the American people. Mr. Mueller put that to bed.”

“Every time Judiciary Democrats tried to walk down obstruction… they even used little charts and put green checkmarks next to them, [but] Mr. Mueller would come and say, ‘No, I don’t subscribe to your analysis.’ [He] kicked it out. So, these are the kind of problems you saw. [Democrats] were hoping for something they’ve not been able to do and it fell flat,” Collins added. (Continued Below)

Asked if he was surprised that Robert Mueller didn’t know what Fusion GPS was, Nunes responded, “I was very surprised at that. And also, this has been the narrative for a long time about this ‘Trump tower meeting’ that lasted for a total of 20 minutes. Even in his report, he says that. So how can you not know, if you’ve looked at everything to do with that Trump tower meeting, you know that House Republicans have been talking about this for months?”

“It was in our report that we wrote about Glenn Simpson and Fusion GPS meeting with Natalia Veselnitskaya, who was the lawyer that met with the Trump tower at the Trump tower meeting that supposedly had ‘the dirt.’ The fact remains that Glenn Simpon, who was working for the Democrats, working for the Clinton campaign, met with that lawyer, we think at least 3 times that we know of, right around the same time, possibly more. So how do you not put that in your report? How do you not interview Glenn Simpson?” Nunes asked.

Collins added that “Democrats are trying any way they can to get somebody to tell them what they want them to say.” (Video Below)