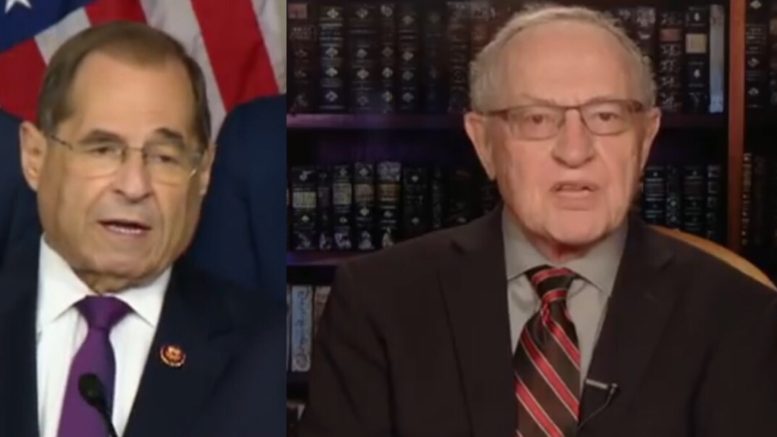 Harvard Law Professor Alan Dershowitz spoke with Martha MacCallum on Fox News’ “The Story” Friday, where he explained that the House Judiciary Committee’s impeachment investigation “is the perfect definition of a fishing expedition.”

This comes after former special counsel Robert Mueller testified and reiterated his findings in that “[T]he investigation did not establish that members of the Trump Campaign conspired or coordinated with the Russian government in its election interference activities.”

Rep. Jerry Nadler (D-NY), however, plans to keep digging and belives the evidence lies “outside of the 4 corners of the Mueller report,” meaning, in the grand jury information.

Democrats on the House Judiciary Committee said Friday they are proceeding with what they called an “impeachment investigation,” as they insisted former Special Counsel Robert Mueller delivered damning testimony against President Trump in this week’s hearing despite concerns from many on the left that his appearance was faltering and broke little new ground, as reported by Fox News.

Nadler and the committee filed a petition in D.C. federal court on Friday to obtain grand jury materials from the former special counsel’s investigation. The petition claims the panel needs the information in order to determine whether to recommend articles of impeachment, in an attempt to give the request more weight in the eyes of the court, as per Fox News.

“To meaningfully consider whether to exercise this authority — as well as to exercise its other pressing legislative and oversight responsibilities — the Committee must obtain evidence and testimony in a timely manner,” the filing reads. (Continued Below)

“The House must have access to all evidence,” Nadler said. “We are exercising our constitutional authority. We are continuing the investigation of President Trump’s malfeasances, and we will do and consider what we have to consider including whether we should recommend Articles of Impeachment to the House. We may, we may not. It remains to be seen.”

However, Dershowitz sounded off: “This is the perfect definition of a fishing expedition. He doesn’t know what he’s looking for. Maybe he’ll throw some hooks in the water and hope maybe he’ll come up with something. That’s not the way investigations are supposed to be conducted, either prosecutorial investigations or congressional investigations.”

“As a Democrat myself, it was painful for me to see how the Democrats are shooting themselves in the foot, they’re hurting themselves,” Dershowitz expressed. (Continued Below)

“Americans don’t want to see this path toward impeachment. They want to see the Democrats work together with the Republicans and try to achieve something to make the lives of Americans better every day, not to go down the line to satisfy 100 radicals off– led by four radicals leading towards something that will never be impeachment. You can’t start an impeachment without a majority of the Congress,” Dershowitz added.

(Related: Maxine Ups The Ante In Her Latest Call For Impeachment, Demands ‘Prison Next’ For Trump)