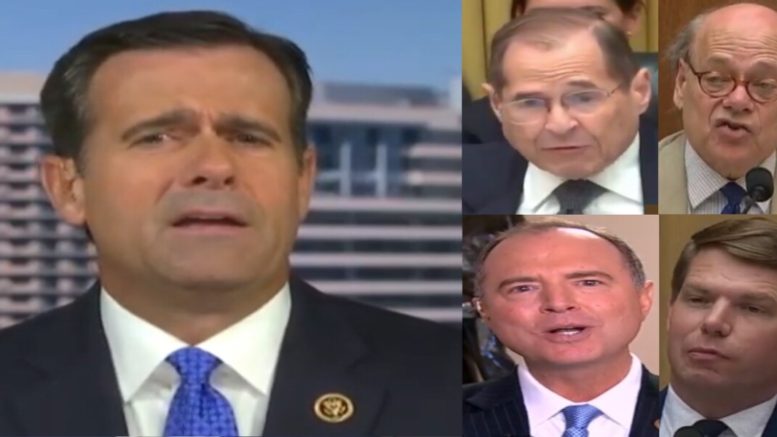 Congressman John Ratcliffe (R-TX) spoke with host Maria Bartiromo during “Sunday Morning Futures” where he weighed in on former special counsel Robert Mueller’s testimony before two congressional committees on Wednesday, and he also pushed back at Democratic lawmakers who are trying to move forward with impeachment.

Rep. John Ratcliffe zeroed in on Robert Mueller during his testimony Wednesday relating to “exoneration.” He announced during the hearing, that Mueller’s findings violated Justice Department policy and the “bedrock principle of our justice system.”

He declared that the obstruction section of the report “was not authorized under the law to be written– it was written under a legal standard that does not exist at the Justice Department.” [Emphasized].

Ratcliffe said on Sunday, “The Democrats built their entire strategy around the special counsel’s statement that Donald Trump could not be exonerated from potential obstruction of justice crimes. But what the Democrats and the special counsel didn’t see was the fatal defect in that legal reasoning– that by requiring Donald Trump to conclusively prove his innocence, they were depriving him of the one thing that no one can be deprived of, which is a presumption of innocence. And getting the special counsel to admit that they applied a ‘one of kind made for Donald Trump only standard’ to the facts really rocked the foundation of their entire obstruction of justice analysis.” (Continued Below)

“At the end of the day, you can’t impeach somebody over ‘obstruction of justice’ where you use the ‘wrong legal standard,’ a legal standard that doesn’t exist,” Ratcliffe continued.

Asked if he popped the impeachment bubble, Ratcliffe said, “It’s time to move on, there’s a hole in the impeachment balloon that’s large enough for Jerry Nadler and Adam Schiff to walk through together. But Schiff and Nadler don’t seem to see that. The same folks that promised there was going to be impeachment by collusion– that died when the Mueller report came out and said there was no collusion or conspiracy. Then they shifted to there was gonna be impeachment by obstruction of justice– that Robert Mueller was gonna ‘breath life into the report’, instead he sucked the life out of it by applying a legal standard that didn’t exist.”

“Now they’re moving on saying that they want to pursue obstruction by the court system and trying to get Grand Jury information. Look, it’s becoming a joke. I think that people see that and Nadler and Schiff are starting to look more like Laurel and Hardy. It’s time to move on,” he added. (Video Below)

Further, President Trump announced on Twitter Sunday afternoon that Rep. Ratcliffe will be nominated to be the next Director of National Intelligence as Dan Coats will be leaving on August 15th.

The Commander in Chief tweeted: “I am pleased to announce that highly respected Congressman John Ratcliffe of Texas will be nominated by me to be the Director of National Intelligence. A former U.S. Attorney, John will lead and inspire greatness for the Country he loves. Dan Coats, the current Director, will be leaving office on August 15th. I would like to thank Dan for his great service to our Country. The Acting Director will be named shortly.”

….be leaving office on August 15th. I would like to thank Dan for his great service to our Country. The Acting Director will be named shortly.

The most interesting part of the interview came when the subject switched to the Justice Department conducting their review of the origins of the Trump-Russia investigation and individuals who may have committed crimes during that time.

Ratcliffe said he does not want to prematurely accuse any specific person of a crime, as Democrats have done with President Trump, but he stressed that it is clear crimes were committed by people during the Obama administration, including government officials.

“I think the first thing we need to do is make sure we don’t do what the Democrats have done. They accused Donald Trump of a crime and then they try and reverse engineer a process to justify that accusation. So I’m not going to accuse any specific person of any specific crime, I just want there to be a fair process to get there. What I do know as a former federal prosecutor is that it does appear that there were crimes committed during the Obama administration,” he said. [Emphasized].

The Texas Congressman explained that this is why Attorney General William Barr, who has tapped U.S. Attorney John Durham to lead the investigation of the investigators, must fill in the gaps.

“Now the things that Bob Mueller said he didn’t know about and his team clearly didn’t look at, those are things that would be fair for Bill Barr and the Department of Justice to look at. Because we know that things happened in the Obama administration that haven’t been answered. There’s been no accountability for that yet,” Ratcliffe said. (Continued Below)

Ratcliffe also recommended three leads for the “investigation of the investigators.”

The first is related to former national security adviser Michael Flynn. “You talked earlier about Michael Flynn. His phone call with the Russian ambassador was a highly classified NSA intercept. Someone in the Obama administration leaked that call to the Washington Post. That’s a felony,” he said.

Ratcliffe suggested investigators also look into conflicting congressional testimony between Fusion GPS co-founder Glenn Simpson and Justice Department official Bruce Ohr. “Glenn Simpson from Fusion GPS in talking about the Steele dossier– said under oath that he and Bruce Ohr did not meet until after the election. Bruce Ohr said under oath that they met three months before the election. One of them is not telling the truth. We need a process to identify that,” Ratcliffe said.

The third area of interest Ratcliffe said is former FBI Director James Comey’s memos on his interactions with Trump before he was fired in May 2017. “Where it all started, Jim Comey. He admitted that he leaked his confidential conversations with the president to a reporter. Did that include classified information? We need a fair process to find out answers to that,” Ratcliffe said.

“I trust because Bill Barr has earned my trust already and the trust of the American people, that there’ll be a fair process with John Durham and with Michael Horowitz to get answers to that and provide accountability where it really belongs,” Ratcliffe added.