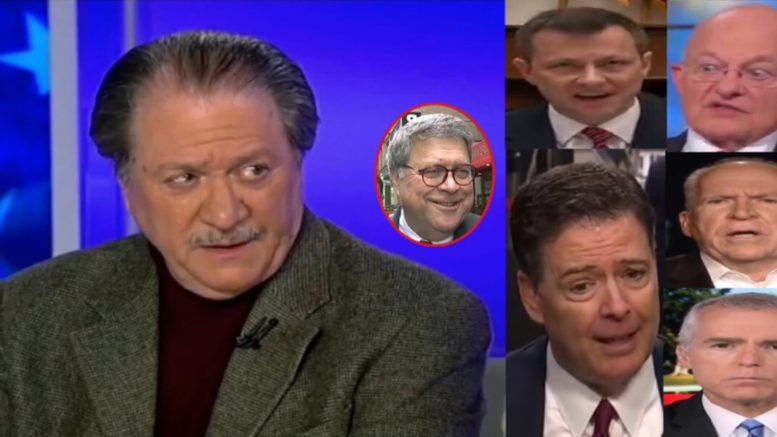 Former U.S. Attorney Joe diGenova spoke with WMAL radio and announced that declassification will begin to be made public starting Wednesday.

In May, President Trump gave Attorney General Bill Barr the green light to declassify documents pertaining to the spying on President Trump’s 2016 campaign.

The Attorney General assembled a team and appointed a U.S. attorney John Durham to investigate the origins of the Russia investigation to determine if the FBI’s “spying” on the Trump campaign in 2016 was adequately predicated.

“The declassification will start this week. There are going to be documents released this week, I think by Wednesday. The Attorney General, as I understand it, is in the process of getting those ready to come out,” diGenova revealed.

“There’s going to be some of the Devin Nunes documents that he requested and then, a series of other releases will come after that, because [John] Durham is progressing very, very quickly in his criminal investigation,” he continued.

diGenova stated boldly that U.S. Attorney John Durham is not conducting a “review”, but is conducting a “criminal investigation with senior DOJ and FBI officials in the Obama administration and intelligence community people, including John Brenan.” (Continued Below)

“This is a federal grand jury. This is not a review, this is not an IG audit. This is not some congressional research service– look at history. This is a criminal investigation of a bunch of people who tried to seditiously overthrow the President of the United States,” diGenova explained.

In June, twenty-three House republicans asked President Trump not to wait and sent a letter to the President urging him to declassify the documents that the FBI & DOJ officials used to get the FISA warrant to spy on the Trump campaign.

The Conservative Treehouse put together a list of possible material for declassification and the intelligence offices who hold custodial authority over the compartmented documents. Some of the list details: versions of the Carter Page FISA applications (DOJ) (FBI) (ODNI), all of the Bruce Ohr 302’s filled out by the FBI- (FBI) (ODNI), all of Bruce Ohr’s emails (FBI) (DOJ) (CIA) (ODNI). All supportive documents and material provided by Bruce Ohr to the FBI. (Video Below)