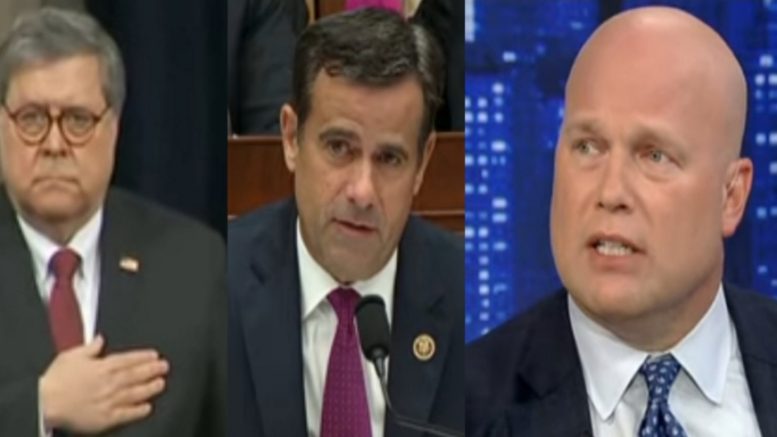 Former Acting Attorney General Matt Whitaker appeared on Fox News to weigh in on the prospects of John Ratcliffe becoming the next Director of National Intelligence.

Ratcliffe was nominated by President Trump to replace Dan Coats as DNI after Coats resigned from the position over weekend.

Whitaker began by stating that he thinks Ratcliffe is “perfectly qualified” for the role and is a “smart, talented individual.”

He then shifted focus to Attorney General William Barr, who he thinks is “the perfect person to, sort of, turn over ever rock and restore the confidence to the American people, and the Congress, and the courts, and the Department of Justice.”

Whitaker mentioned how he believes that there were several “politically motivated” acts that occurred during the genesis of the Russia probe.

So, he is confident that AG Barr will “figure this out,” and “prosecute whoever needs to be prosecuted,” especially with the help of John Durham and others who are part of the investigation. Video Below

Whitaker said Ratcliffe’s role will be crucial for the Russia probe investigation because he can “look at the entire intelligence community and see if there were any systemic failures for how these investigations were kicked off,” as well as some of the other issues.

Related Article: Whitaker SLAMS Dem Candidates Who Think Mueller Made The Case To Impeach Trump: ‘It Is Their Best Opposition To This President’

As a result, Whitaker proclaimed, “With Barr and Ratcliffe both working these angles, I think they’re the “perfect team.” Video Below