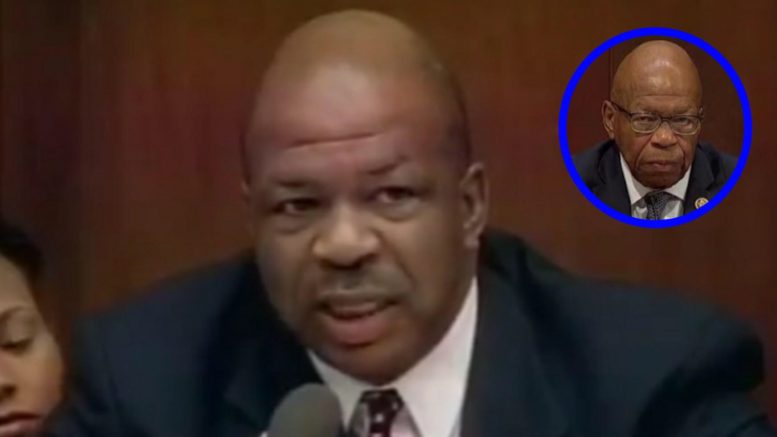 As the left and the media drum up their claims that the President is “racist” after he called parts of Baltimore a “disgusting rat and rodent-infested mess”, a video surfaced on social media of Rep. Elijah Cummings (D-MD), who called his own community “drug-infested.”

During a hearing in 1999 on the House Oversight Committee, panel members heard testimony about the flow of drugs from Colombia to the U.S. and federal government efforts to block it.

Witnesses, during the hearing, testified that the Colombian drug trafficking problem was growing and that supply and demand must both be reduced through enforcement and education in order to control the problem.

Rep. Elijah Cummings said during that hearing in 1999, “This morning I left my community of Baltimore, ‘a drug-infested area’ where people are ‘walking around like zombies.’

On Saturday, President Trump wrote on Twitter, “His district is considered the Worst in the USA. As proven last week during a Congressional tour, the Border is clean, efficient & well run, just very crowded. Cumming[s] District is a disgusting, rat and rodent infested mess. If he spent more time in Baltimore, maybe he could help clean up this very dangerous & filthy place”.

He added, “Why is so much money sent to the Elijah Cummings district when it is considered the worst run and most dangerous anywhere in the United States.” (Continued Below)

Democrats defended Cummings while accusing President Trump of a “racist” attack toward the Maryland congressman.

House Speaker Nancy Pelosi took to Twitter and wrote, “Rep Cummings is a champion in the Congress and the country for civil rights and economic justice, a beloved leader in Baltimore, and deeply valued colleague. We all reject racist attacks against him and support his steadfast leadership.”

Victor Blackwell at CNN had an “emotional breakdown” on-air and claimed that the President “attacked an African American lawmaker”. Further, Al Sharpton went to Baltimore Monday, gave a press conference, then suggested that the President has “venom for blacks.” (Continued Below)

Host Chris Wallace insinuated on “Fox News Sunday” that the President was “racial stereotyping” members of Congress, during an interview with Acting White House Chief of Staff Mick Mulvaney.

“You say it has zero to do with race. There is a clear pattern here, Mick. The fact is before his inauguration the President tweeted about John Lewis, a black congressman– he should spend time in his ‘infested’ district. Then two weeks ago, he goes after these 4 members of the squad, all women of color, and says they should go back to the ‘crime infested’ countries from which they come. Then, he talks about Elijah Cummings, and he says his district is ‘rat and rodent-infested’. ‘Infested’, it sounds like vermin, it sounds sub-human. And these are all 6 members of Congress, who are people of color,” Wallace claimed.

Elijah Cummings’ full remarks during the 1999 hearing start at 38:00 minutes into the video:

(Related: Bongino Issues A Sheer Warning To Trump Over Baltimore: ‘Don’t Dare Run Away From This Argument’)