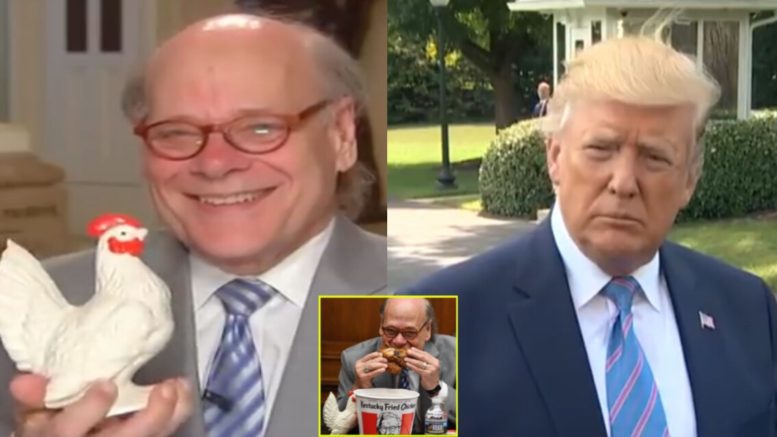 Rep.Elijah Cummings’ (D-MD) Baltimore house was reportedly broken into in early last Saturday morning before President Trump tweeted about the Maryland congressman and his district.

A CBS affiliate in Baltimore reported that Cummings’s home was broken into. A Baltimore Police Department spokesperson confirmed to The Hill that a burglary had taken place in the area at about 3:40 a.m. Saturday and the department was investigating, as per The Hill.

President Trump responded to the news of Cummings’ home broken into and wrote on Twitter Friday “Really bad news! The Baltimore house of Elijah Cummings was robbed. Too bad!”

Anti-Trump Rep. Steve Cohen (D-TN), however, took to Twitter on Friday suggesting the President was “classless”. He wrote, “Non class act to the nth. Nobody does classless better than Trump.”

Cohen was met with instant backlash on Twitter as constituents reminded him of when he brought a bucket of fried chicken to a hearing in May after Attorney General William Barr declined to appear for a House Judiciary Committee hearing a day after he testified before the Senate Judiciary Committee about the Mueller report. (Continued Below)

Rep. Cohen sat in his seat in the committee room in May and ate fried chicken, along with displaying a glass chicken prop over the seat Barr would have sat in if he had appeared before the committee in May.

Barr declined to appear after Chairman Jerry Nadler (D-NY) and his Democratic-led committee voted for “staff” to ask questions of the Attorney General; Barr wasn’t interested in the Chairman’s shenanigans.

The anti-Trump Congressman called Barr “#ChickenBarr” on Twitter and threatened to use subpoenas. He wrote, “#ChickenBarr won’t be appearing before @HouseJudiciary tomorrow. The Attorney General shouldn’t be afraid of taking questions from counsel or members. Contemptible behavior. Fortunately, we have subpoenas ready.” (Continued Below)

Non class act to the nth. Nobody does classless better than Trump. https://t.co/cgZy5wULzb

President Trump’s statement to the press about his tweet:

Trump on tweet that many read as celebrating an attempted burglary at Elijah Cummings’s house: “The tweet itself was just really a repeat of what I heard over the news. I know his house was robbed, and I thought that was too bad. That was really not meant as a wise guy tweet.” pic.twitter.com/vPIZWs0Tc4

Cohen is the most classless person I see in Congress!!!! And I am ashamed that he is from my state of Tennessee!!!!! We Tennesseans are better than that dirt bag, Steve Cohen!!!!

But the left is so accepting and tolerant. Right Chicken Steve?

YOU literally brought FRIED CHICKEN to a hearing and embarrassed Memphis. You’re one to call “classless.” That’s trashy, childish and redneck. Maybe you’re secretly in love with President Trump? Every tweet is about him that you post. Send him a love letter already. Good grief.

Trump stated a fact and said “too bad!” What’s wrong with that? Damn if he does and damned if he doesn’t!
What isn’t acceptable, @LeslieBarron is Steve Cohen disrespecting the office of The President of The United States of America! #HeIsOurPresident#Trump2020 #KAG2020

No
You are hard to beat in that category Chicken Stevie

The irony is rich with this one.

You are worth over $1million and your constituents live in the projects. Your day is coming chicken Steve.

Do you ever wonder if you missed your calling in life which could have been a professional clown? pic.twitter.com/auTu7buNfr

Says the dude that ate KFC with a rubber chicken during a house committee hearing.

Nobody does clown better than you.

And who better to define “class” than a sitting Representative eating greasy fried chicken in the House. What a joke. 🙄🙄

Steve, you are in the same boat. Typical Democrat liberal “do as I say, not as I do”

But your name isn’t Trump. Your fried chicken stunt was embarrassing, at best, and the people of Tennessee, who are ashamed of you, disagree with your statement. Tennessee voted for Trump and we’ll do it again, while simultaneously firing you for being a degenerate. Bye boy! 👋🏼

I don’t know how in the hell you get elected because I haven’t heard any Tennessean say 1 good thing about your classless a**! And you make blanket, ridiculous statements about @realDonaldTrump. Just remember this Jerk, Tennesseans voted Trump in 93 of 95 counties. #Trump2020

Or at least censured for his hateful-vile tweets against the PRESIDENT!