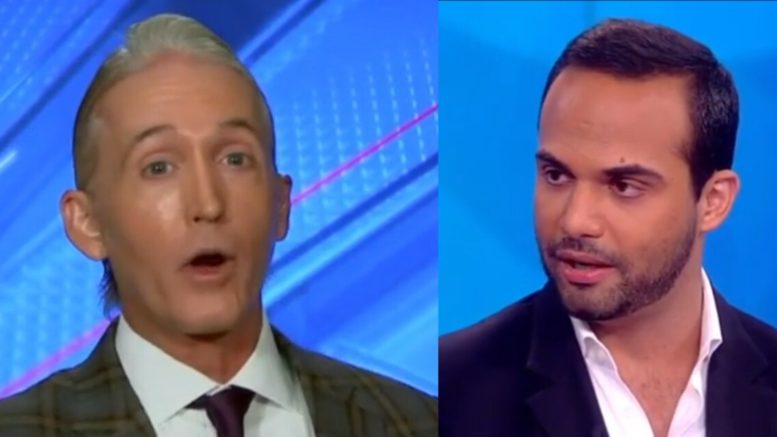 Former South Carolina Congressman, Trey Gowdy, spoke with host Maria Bartiromo on Fox News’ “Sunday Morning Futures” where he weighed in on George Papadopoulos and a transcript that he has seen.

In May, Gowdy announced that he has seen a transcript that’s still classified, between Papadopoulos and an informant, Stephan Halper, that has the potential to be a game-changer if it’s ever made public.

“It certainly has the potential to be [a game changer].” Trey Gowdy said of the transcript between George Papadopoulos and the informant. “Why you haven’t seen it yet, I am lost, I am clueless. It is not that level of classification that is gonna impact relationships with our allies. It goes to a fundamental preset we have in this country when there is exculpatory information– information tending to show a person did not commit a crime– that information is every bit as important as any inculpatory.”

He explained the transcripts are important for two reasons: “To buttress that fundamental precept, but also think about all the questions you and your viewers have Maria. When did the investigation begin? The FBI and the DOJ said it was never intended to investigate the Trump campaign, just Russia. Okay, great. Show us the transcripts. Show us what questions you poached the informants or cooperating witnesses to ask of the Trump campaign officials.”

Gowdy clarified, “If it’s not about the campaign, then you win. You’re right. But if you’re veering over into the campaign or your questions are not solely about Russia, then you’ve been misleading us for two years. The good thing about transcripts, they don’t have to remember. All you gotta do is read them. They don’t have bad memories. Just release the transcripts and we can tell for ourselves when it began and what it was about.”

Maria Bartiromo said she spoke with George Papadopoulos on Saturday night to prepare for her interview with Gowdy. (Continued Below)

“George Papadopoulos told me last night that the memo and the transcript that you’re referring to is from a conversation that he had with Stephen Halper and it was in London. It was at the Sofitel Hotel in London where Stefan Halper said something to him like ‘Well, Russia has all these emails of Hillary Clinton and you know when they get out… that would be really good for you, right? Would you help? That would be really good for you and the Trump campaign if all those emails got out, right?'” Maria said of her conversation with Papadopolous.

Bartiromo continued, “George Papadopoulos said, ‘That’s crazy! Are you kidding me? That would be treason! People get hanged for stuff like that. I would never do something like that.‘ That is the transcript that George Papadopoulos told me is still classified.” [Emphasized].

“Now, I know you can’t admit if that’s it or not,” Bartiromo said to Gowdy. “But let me just say if that is basically the conversation, that should have been given to the FISA court, right? That should have made public to at least show us that George Papadopolous has that question asked of him and he said, ‘Are you nuts? That’s treason!'” (Continued Below)

Gowdy responded, “Only if you want a justice system that’s fair. That’s the only reason it should be produced to a court… is if you want a justice system that treats people justly and fairly. What you just described is textbook exculpatory information. It tends to show the person did not commit a crime. A crime, by the way, Maria, he was never charged with– never colluding with Russia.”

Gowdy added, “It also speaks to what the FBI and the department were doing back in 2016. Was their target Russia or was there target the Trump campaign? We’re not gonna know un[til] you make the transcripts public. The one you referenced was a single transcript. There are gonna be others.” [Emphasized].

(Related: Jordan Grills Mueller On Why He Never Charged A Key Witness Who ‘Lied’ To His Team: ‘Why Didn’t You Charge Him With A Crime?’)