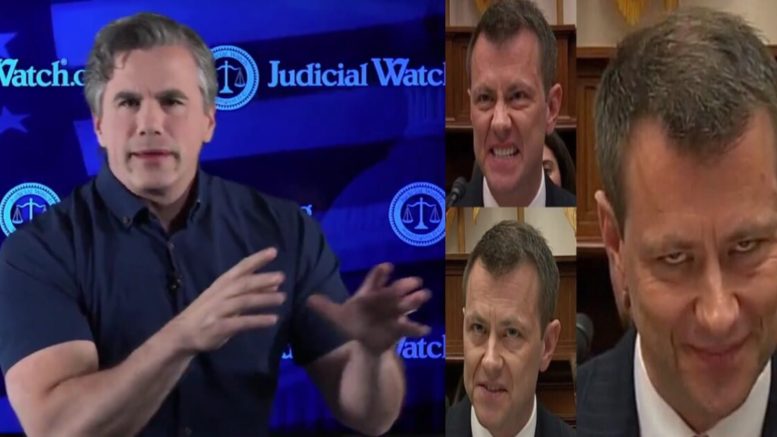 Former FBI agent, Peter Strzok, who was fired over anti-Trump text messages, sued the Justice Department and the FBI Tuesday, claiming that he was fired due to “political pressure from President Trump.”

In the lawsuit, filed against Attorney General William Barr and FBI Director Christopher Wray, Strzok also alleged that his First Amendment rights were violated, as was his privacy due to leaks of his text messages to the media, reported Daily Caller.

“The FBI fired Special Agent Strzok because of his protected political speech in violation of his rights under the First Amendment to the Constitution of the United States,” reads the lawsuit, which seeks back pay and Strzok’s reinstatement to the FBI.

Strzok was a lead investigator on both the Hillary Clinton email investigation and the Trump-Russia probe. As deputy chief of counterintelligence, Strzok opened the FBI’s investigation of the Trump campaign on July 31, 2016.

He joined the special counsel’s team shortly after it was formed on May 17, 2017, but was removed from the investigation in late July 2017 after the Justice Department’s inspector general discovered that Strzok and his mistress, an FBI lawyer named Lisa Page, had exchanged numerous text messages criticizing Trump.

On Aug. 8, 2016, Strzok assured Page that “we’ll stop” Trump from becoming president. On Aug. 15, 2016, Strzok said that the FBI needed an “insurance policy” in case Trump was elected.

Strzok insists in the lawsuit that his anti-Trump text messages are protected by the First Amendment and that he was the victim of “unrelenting pressure from President Trump and his political allies in Congress and the media.”

“The campaign to fire Strzok included constant tweets and other disparaging statements by the President,” the lawsuit says. He also alleges that his firing was the result of “unlawful disclosure to the media of texts, intended to be private, from an FBI system of records.” (Continued Below)

The lawsuit also alleges that FBI Deputy Director David Bowdich rejected a recommendation from the FBI’s Office of Professional Responsibility (OPR) to “suspend and demote, rather than fire” Strzok. According to the lawsuit, Candice Will, the head of OPR, rejected a proposal to fire Strzok. Instead, she recommended that Strzok be suspended without pay for 60 days and demoted, the lawsuit says.

“While many in law enforcement have faced attacks by this president, Pete Strzok has been a constant target for two years. It’s indisputable that his termination was a result of President Trump’s unrelenting retaliatory campaign of false information, attacks and direct appeals to top officials,” Aitan Goelman, a lawyer for Strzok, said in a statement announcing the lawsuit.

“The lawsuit shows that, in bowing to the president’s desires, FBI leaders trampled Pete’s free speech and due process rights in ways that should be deeply troubling to all in government, and indeed, to all Americans. Today, Pete Strzok is fighting back, and sending a message that the Administration’s purposeful disregard for constitutional rights must not be tolerated.”

President of Judicial Watch, Tom Fitton, took to Twitter to point out that despite Strzok’s new lawsuit, the FBI protected and is still protecting Peter Strzok.

According to Judicial Watch, the Court scheduled the hearing to discuss: “Upon further consideration, the Court is concerned that the processing rate adopted by the Court may be inadequate.” The Court’s July 24th order follows a joint status report by the FBI and Judicial Watch that discloses that only 6,000 of almost 20,000 responsive records have been processed since May 2018.

“The FBI has been slow-rolling the release of Page-Strzok communications and is still hiding all their infamous text messages,” stated Fitton. “We hope the Court recognizes the pubic interest in ensuring the FBI quickly releases key documents about the biggest scandal in American history – the Spygate abuses targeting President Trump.”

Ironically, despite his new lawsuit alleging otherwise, @FBI protected and is still protecting Peter Strzok, who abused his position to target @RealDonaldTrump. https://t.co/tAOO0yL4rl

Some more useful information to remember about Peter Strzok:

And here's what Strzok said about you:

"Trump's supporters are all poor uneducated, lazy POS," "his supporters like the ones from ohio that are retarded"

“Just went to a southern Va. Walmart. I could SMELL the Trump support”

On pro-lifers: "I truly hate these people"

We leave you with Trey Gowdy who pushed back on assertions that the firing of former FBI agent Peter Strzok was a political hit job. The interview is from Aug 13, 2018.