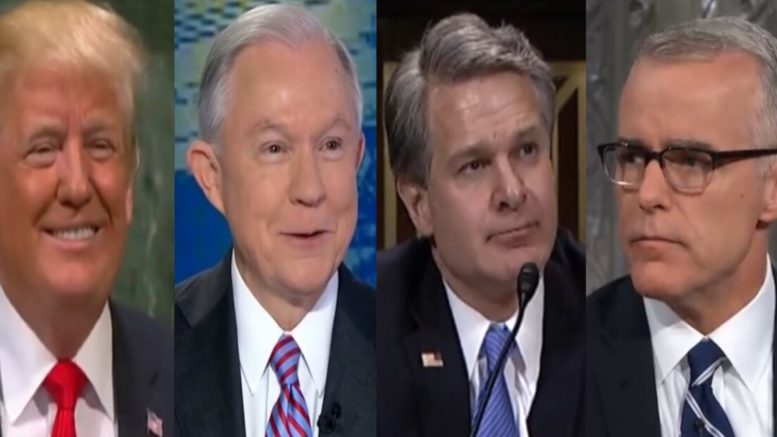 Former FBI Deputy Director Andrew McCabe is suing the Trump administration for claiming it was  “unlawful” termination, and arguing that his firing last year was the result of improper political interference by President Trump.

McCabe, like Peter Strzok, is bringing a lawsuit against the Justice Department and the FBI for “violating his First Amendment rights” by firing him for his “refusal to pledge partisan allegiance” to President Trump.

“Trump purposefully and intentionally caused the unlawful actions of Defendants and other Executive Branch subordinates that led to Plaintiff’s demotion and purported termination,” McCabe’s lawsuit states. “It was Trump’s unconstitutional plan and scheme to discredit and remove DOJ and FBI employees who were deemed to be his partisan opponents because they were not politically loyal to him.”

McCabe’s filing additionally argues that he is “entitled to his full law enforcement pension and all other benefits, privileges, and rights currently being withheld,” claiming that his firing was “a legal nullity” because he had already retired by the time the termination order was issued, and reinstatement as deputy director to a date that would allow him to receive his full retirement benefits.

McCabe was terminated two days before his formal retirement was set to kick in. “Pursuant to Department Order 1202, and based on the report of the Inspector General, the findings of the FBI Office of Professional Responsibility, and the recommendation of the Department’s senior career official, I have terminated the employment of Andrew McCabe effective immediately,” Sessions said in a statement. (Continued Below)

“After an extensive and fair investigation and according to DOJ procedure, the Department’s Office of the Inspector General (OIG) provided its report on allegations of misconduct by Andrew McCabe to the FBI’s Office of Professional Responsibility (OPR),” Sessions said.

The FBI’s OPR then reviewed the report and underlying documents and issued a disciplinary proposal recommending the dismissal of Mr. McCabe. Both the OIG and FBI OPR reports concluded that Mr. McCabe had made an unauthorized disclosure to the news media and lacked candor − including under oath − on multiple occasions.

McCabe’s lawsuit also quotes some of President Trump’s tweets against McCabe and his wife, whose donations to Hillary Clinton were used by the president to cast doubt on McCabe’s impartiality: “How can FBI Deputy Director Andrew McCabe, the man in charge, along with leakin’ James Comey, of the Phony Hillary Clinton investigation (including her 33,000 illegally deleted emails) be given $700,000 for wife’s campaign by Clinton Puppets during investigation?” the President tweeted. (Continued Below)

McCabe further claimed that President Trump publicly celebrated McCabe’s termination: “Andrew McCabe FIRED, a great day for the hard working men and women of the FBI – A great day for Democracy. Sanctimonious James Comey was his boss and made McCabe look like a choirboy. He knew all about the lies and corruption going on at the highest levels of the FBI!” Trump tweeted after McCabe’s firing. (Continued Below)

The lawsuit can be read [HERE].

NEW: Andrew McCabe sues over firing, says Sessions and Wray "served as Trump’s personal enforcers” and catered "to Trump’s unlawful whims instead of honoring their oaths to uphold the Constitution.” https://t.co/FSJsm1xiFF

Investigative reporter Sara Carter said on Fox News after McCabe’s firing:“[McCabe] believes this is all about President. No, this is about his colleagues at OPR…who found he had lied.”

.@SaraCarterDC: "[McCabe] believes this is all about [@POTUS]. No, this is about his colleagues at OPR…who found he had lied." #IngrahamAngle https://t.co/rjbwWNHPjX pic.twitter.com/2LJrihxcnG