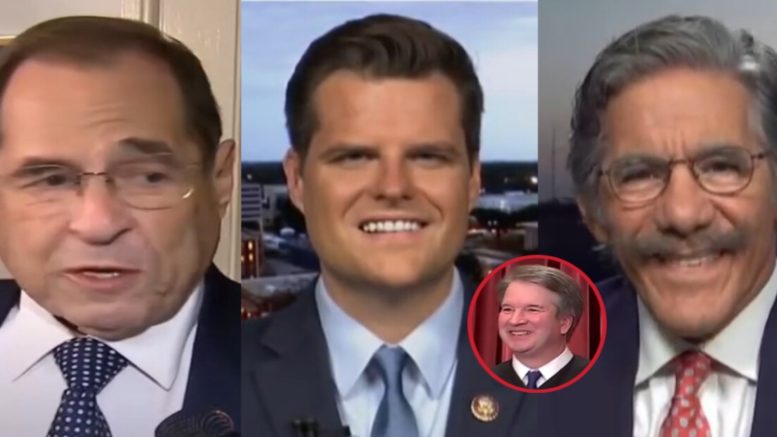 Rep. Matt Gaetz (R-FL) and Geraldo Rivera spoke with host Martha MacCallum on Fox News’ “The Story” Wednesday where they weighed in on House Judiciary Committee Chairman Jerry Nadler (D-NY), who is seeking access to Justice Brett Kavanaugh’s records from his employment in the George W. Bush White House.

Nadler sent a letter Tuesday to the National Archives asking the records department “to complete its review and release records,” to the panel related to Kavanaugh’s 2001-2006 White House service when he served as Staff Secretary and in the White House Counsel’s Office.”

Geraldo Rivera believes that Jerry Nadler is in “mourning” after the “Russia-Gate hoax” did not play the way he had hoped.

“So, they’re focusing now on Brett Kavanaugh, the guy who was collateral damage in the total war the Democrats declared. They savaged his reputation, they put him through the wringer,” he added.

Martha MacCallum said the Democrats are looking through Kavanaugh’s memos that he wrote years ago, possibly in relation to Roe Vs. Wade, immigration, and profiling during the post 9/11 period. “It looks like the effort is potentially to try to if not impeach him, try to make it so that he has to recuse himself from certain issues. Is that something that could ever happen in our system?” she asked. (Continued Below)

“I’m with Geraldo,” Gaetz continued. “They tried to relitigate the Russia investigation, that didn’t work out. Now, they’re trying to relitigate the Kavanaugh confirmation. Maybe next, they’ll pull out the old tapes from ‘Rivera Live’ so we can relitigate the OJ [Simpson] trial.”

A panel of federal judges has permanently dismissed 83 ethics complaints filed against Justice Brett Kavanaugh around the time of his confirmation hearing last fall without considering their merits, stating that it does not have the authority to do so. The panel, called the Committee on Judicial Conduct and Disability, concluded that Kavanaugh is no longer subject to the federal judiciary’s internal ethics review process, because he is now a member of the Supreme Court, as per Huff Post. (Continued Below)

Asked if anyone has told Jerry Nadler about the panel of judges who dismissed the ethics complaints, Geraldo responded, “That’s why Justices are appointed for life– to remove them from the grip, the sworded, dirty, sleazy, grip of partisan politics They get appointed to the high court for life. He’s been confirmed by the United States Senate. He’s on the high court, he has a critical job to do.”