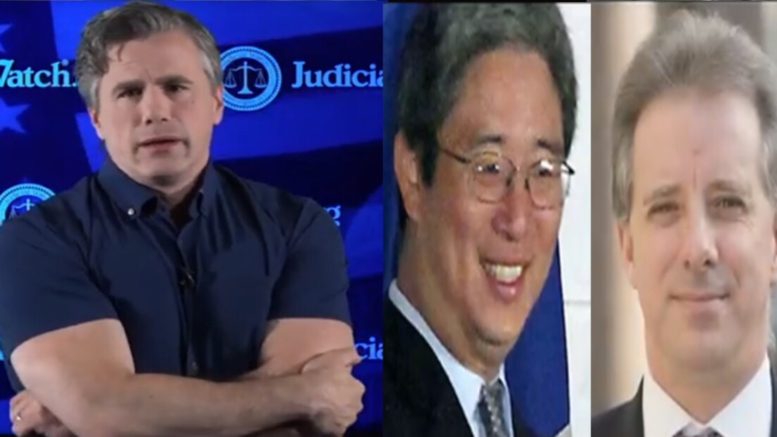 As reported by Daily Caller, Justice Department lawyers said the agency had initially determined that the Ohr transcripts, known as 302s, should be withheld in full. But “after further review in conjunction with DOJ’s preparation of its motion for summary judgment, DOJ has decided to release the requested records in part to Plaintiff,” the lawyers said.

Judicial Watch sued on Sept. 10 for a dozen 302s the FBI compiled between Nov. 22, 2016, and May 15, 2017. FBI agents interviewed Ohr after meetings and conversations with Steele, a former British spy who investigated the Trump campaign on behalf of the Clinton campaign and Democratic National Committee.

FBI investigators had tasked Ohr to serve as an unofficial backchannel to Steele as part of the bureau’s investigation of the Trump campaign’s possible ties to Russia. The FBI cut ties with Steele on Nov. 1, 2016, after learning that he had unauthorized contacts with the media about his work as an FBI informant. Steele and Fusion GPS, the firm that hired him, provided information from the dossier to numerous reporters during the 2016 campaign, per Daily Caller.

Ohr, whose wife worked as a contractor for Fusion GPS, has told Congress that Steele said to him during one meeting that he was desperate to see Trump lose the 2016 election. Republicans say that the FBI did not disclose that fact in applications to wiretap Page. The FBI also did not disclose that the Clinton campaign and DNC had funded Steele’s dossier.

Ohr and Steele had known each other for years before the began meeting to discuss the Trump investigation. They first met on that topic on July 30, 2016, in Washington, D.C. After the meeting, Ohr briefed then-FBI Deputy Director Andrew McCabe about Steele’s work. (Continued Below)

Steele met on Aug. 22, 2016, with Glenn Simpson, the founder of Fusion GPS. Republican investigators have wondered why Steele and Simpson passed information to Ohr, when Steele already had a contact at the FBI. Steele gave some of his early dossier memos to FBI agent Michael Gaeta during a meeting in Rome on July 5, 2016.

BREAKING: FBI 302 reports of Bruce Ohr released to @JudicialWatch.Confirm FBI warned that [Steele?] was “desperate that @RealDonaldTrump not get elected and was passionate about him not being the U.S. President.” Fitton tweeted.

BREAKING: FBI 302 reports of Bruce Ohr released to @JudicialWatch. Confirm FBI warned that [Steele?] was "desperate that @RealDonaldTrump not get elected and was passionate about him not being the U.S. President."

(Related: Rep. Jordan Just Revealed ‘Key Details’ That Will Be Released Within The Secret Documents)