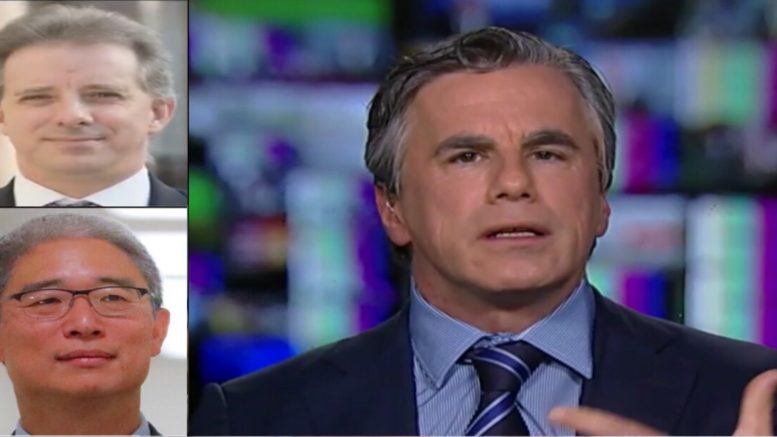 President of Judicial Watch, Tom Fitton, spoke with host Sean Hannity on Fox News Thursday where he explained in detail about the documents Judicial Watch received of FBI 302 interviews with Bruce Ohr.

In late September 2016, Ohr described a person (likely Christopher Steele) as “desperate that Donald Trump not get elected and was passionate about him not being the U.S. President. Ohr was secretly staying in contact with Steele on an app called “What’s App” after Steele was fired from the FBI for leaking to the media, according to the released documents.

Tom Fitton explained Thursday: “Start from the beginning. Christopher Steele had begun working for the FBI during the campaign and the FBI fired him because he was a leaker. So, they went to Bruce Ohr, whose wife worked for Fusion GPS after the election, and started talking to Ohr, who was Steele and Glen Simpson of Fusion GPS. And these are the reports of those discussions.” (Continued Below)

“According to these documents, the first one they release, it’s clearly referencing Steele, although they don’t mention his name, he says that this person, presumably Steele was ‘desperate Donald Trump not get elected and passionate about him not being the U.S. President,” Fitton said.

“This is how it starts off Sean,” the Judicial Watch President continued. “With this source desperate to keep the President out of office after he’s elected. Bruce Ohr continues to talk to the FBI and the DOJ. He confirms that Glen Simpson at Fusion GPS have been talking to the State Department. This information was going over to a State Department official, the Clinton campaign, and the FBI. Talk about a joint operation.”

He revealed from the documents: “Steele and Bruce Ohr are communicating using the ‘What’s App’ application, the application that provides secure communications– which if that doesn’t suggest there’s something wrong going on, I don’t know what does. And frankly, the fact that Bruce Ohr is being interviewed at all repeatedly as a witness in this investigation–a DOJ official. Why is he a witness? He’s working of course, for his wife.” (Continued Below)

Fitton noted Bruce Ohr was interviewed 12 times by the FBI in the “get Trump operation”, and he was “funneling information directly from Fusion GPS from thumb drives, including a thumb drive from his wife’s research from Fusion GPS to ‘get Trump'”.

“They strip ‘Fusion GPS’ off of the documents and [Bruce Ohr] hands it to the FBI,” Fitton said, according to the documents Judicial Watch received. [Emphasized].

Fitton went on say that Bruce Ohr confirmed that he was directing leaks from Fusion GPS to Mother Jones and other publications. “You have Bruce Ohr working for the FBI and trying to set up continued communications back with Christopher Steele. Remember, Christopher Steele was cut off and the FBI was using Ohr to convince him to meet with them and they try to meet with him in the United Kingdom, these documents show,” Fitton said.

“You have Bruce Ohr acknowledge his wife knew that she was working on behalf of the Clinton campaign conducting this investigation for Fusion GPS. Christopher Steele goes to Bruce Ohr– he’s worried about his business and creating a proposal to work with the FBI again. Ohr is the intermediary here,” he continued.

Fitton noted that the communications between the State Department show Glen Simpson was talking repeatedly to a top State Department official under Obama, Victoria Nuland. “This is top levels at the State Department working with the Clinton campaign operative on this ‘get Trump effort.’ It shows you the broad nature, unprecedented nature, secretive nature, corrupt nature of the investigation targeting Trump that involved the FBI, DOJ, and State Department,” Fitton expressed.

“When you look at the corruption, as it’s described here because it is corruption, then you have to step back and recognize none of this was told to the FISA courts as they’re authorizing spying based on this garbage– in unprecedented spy warrants targeting President Trump!” Fitton declared. [Emphasized] (Video Below)

“These documents show [Bruce Ohr] was an active participant to ‘get Trump’. We have other documents we’ve uncovered from the State Department showing he was working with State Department officials to get allegations against Trump and Russia going. And obviously, he was conflicted in 6 ways to Sunday because of his wife’s professional relationship with Fusion GPS,” he said.

“Another big point that we should mention is that Bruce Ohr confirms in these FBI reports is that Steele told him he met with a [John] McCain staffer in October 2016, obviously about the dossier. And just before was Mueller appointed, these meetings that the FBI was trying to set up with Steele, that’s when all of that coming to a head– just days before Mueller was appointed– the FBI’s desperate to meet with Christopher Steele in the United Kingdom. And you have to wonder if Mr. Mueller took up the baton and continued his working relationship with Fusion GPS,” Fitton pointed out. [Emphasized].

Read the press release from Judicial Watch about the FBI 302 interviews with Bruce Ohr [HERE].