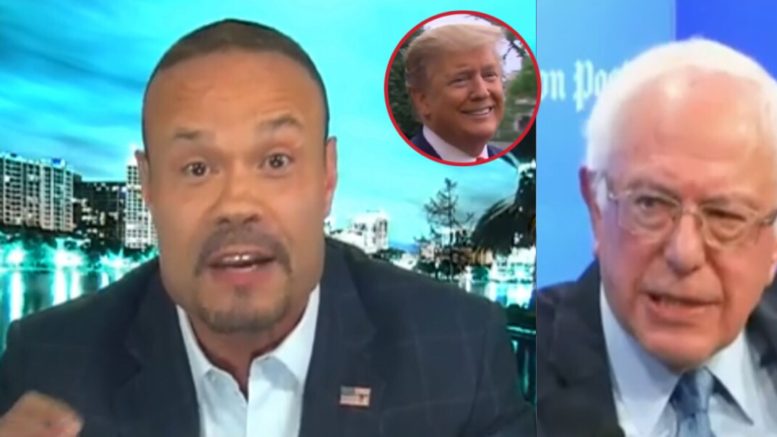 Bernie Sanders took to Twitter on Saturday where he wrote, “Donald Trump believes climate change is a hoax. Donald Trump is an idiot.”

Dan Bongino responded with immediate laughter and accused Bernie Sanders of believing in the “money fairy” for proposing a “Medicare-for-all” plan that he estimates will cost up to $40 trillion over a 10-year period.

Bernie admitted that “his” medicare for all plan would cost $30-40 trillion over a 10- year period during an interview with The Washington Post.

“We’re talking about a guy who can’t do first-grade-level math and Donald Trump is an idiot?” Bongino asked, later questioning what jobs Sanders has held outside of politics. “Shall we go on? This guy’s never had a real job outside of politics his entire life. You understand, he can’t do basic math. He believes in the ‘money fairy.'” (Continued Below)

Bongino also pointed out that Sanders is a millionaire who owns three houses, including a $575,000 four-bedroom lake-front home in his home state, though he often rails against the wealthy. He argued that Sanders often fails to explain how his far-left proposals would be funded, as per Fox News.

“It’s never his money. The guy owns 2 or 3 houses? Is it two or three now? He owns 2 or 3 houses and claims to be a socialist. And Donald Trump’s an idiot? Let me tell you something, all you Sanders supporters out there, I don’t know the guy, I’ve never met him. But I’m telling you right now, based on his public statements, I have never in my life seen a bigger phony, fake, fraud in politics than this joker. He’s never had a job, he doesn’t work. He’s a millionaire. Notice he stopped railing against millionaires? He only rails against billionaires now,” Bongino pointed out. “You know why? Because he’s a millionaire.” (Video Below)

“He’s the biggest phony out there, [a] total fraud,” Bongino reiterated.

Sanders, a socialist, reportedly spent nearly $300,000 on private air travel last October so he could speak to audiences in nine battleground states prior to November’s midterm elections. During the 2016 election, Sanders spent $5.2 million on private jet services in a six-month period, from the end of 2015 to mid-2016, as per Fox News.

(Related: Bongino Brings Forth The Most ‘Damaging’ Implications From Ohr’s 302s: ‘Steele May Not Have Even Written The Dossier’)