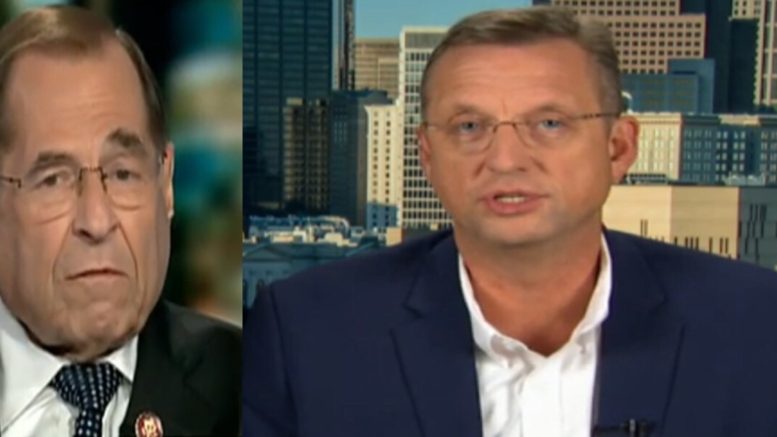 During a segment with CNN’s Erin Burnett, Nadler said his probe amounts to “formal impeachment proceedings.”

“‘This is formal impeachment proceedings.‘” Jerry Nadler said last Thursday on CNN. “We are investigating all the evidence, we’re gathering all the evidence and we will at the conclusion of this, hopefully by the end of the year, vote [on] articles of impeachment onto the House floor, or we won’t. But, that’s the decision we will have to make. That’s the exact process that we’re in right now.” [Emphasized]

“My Chairman of the committee has been going around on media all over saying that ‘they’re in [an] impeachment inquiry.’ He knows that’s not true,” Collins continued.

Collins said that Nadler wants to have it both ways, and he clarified, “We’ve become a committee of press releases. We just want to have a Twitter moment or press release moment, when which we’re doing nothing. And what he’s wanting to say here for ‘impeachment’ is ‘[to] his hardcore base– he has a primary, by the way, that is I think, affecting him here. And he’s wanting to say ‘look, I’m being tough on the President, and we’re doing impeachment.'” [Emphasized]

“When in reality, it’s Speaker Pelosi that they’re protecting from members like here in Georgia and others on the committee and others in their majority, who do not want to vote on a formal impeachment inquiry, which is what they would have to do if they move forward with this,” he added. (Video Below)

“Remember, there’s always politics here, and it’s not just politics at getting at this President. They don’t want to talk about the good that the Presidents [has] done. They don’t want to help him. They also want to make their base appear that they’re actually attacking him, which is false because they’re trying to protect some of their members at the same time,” Collins concluded.

Rep. Doug Collins comments about Nadler begin at 4:05 into the video: