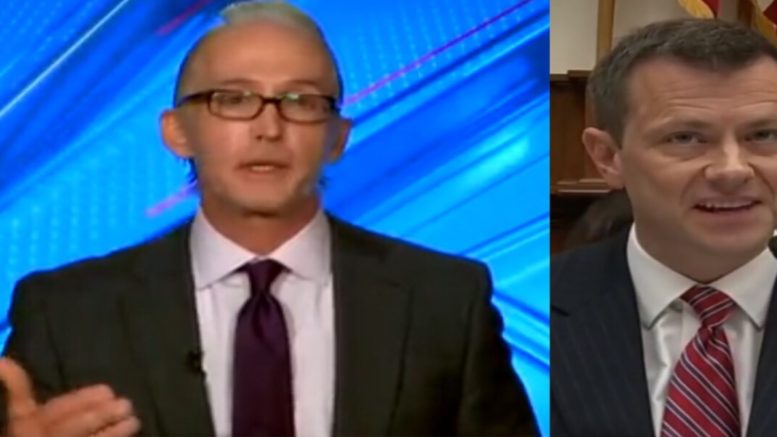 They discussed former FBI official Peter Strzok, who filed a lawsuit to “get his job back.”

Last Tuesday, Peter Strzok sued the Justice Department and the FBI, claiming that he was fired due to “political pressure from President Trump.”

In the lawsuit, filed against Attorney General William Barr and FBI Director Christopher Wray, Strzok also alleged that his First Amendment rights were violated, as was his privacy due to leaks of his text messages to the media, reported Daily Caller.

“The FBI fired Special Agent Strzok because of his protected political speech in violation of his rights under the First Amendment to the Constitution of the United States,” reads the lawsuit, which seeks back pay and Strzok’s reinstatement to the FBI.

Trey Gowdy said Strzok failed to name the right person as a defendant and explained more in detail of the reality why he was fired. “There [are] ‘two things’: remember he says he was fired because he was exercising his constitutionally protected right to free speech, but he also offered to accept a 60-day demotion. He offered to take a cut in pay and he expressed profound remorse.” (Continued Below)

“You don’t express ‘profound remorse’ for exercising a constitutionally protected right. And you don’t agree to a 60-day suspension and a cut in pay and a demotion if you ain’t’ done nothing wrong,” Gowdy said. “That’s what he did.”

“Who fired him? It wasn’t any of the people he sued, ironically enough. It was the deputy director of the FBI, David Bowdich. It wasn’t Chris Wray, it was David Bowdich. Let me tell you, he’s a career FBI guy, he’s not a political appointee. Let me give you a little flavor of his background: he was a local cop, then he became a bureau agent. Then he was a swat team guy and this is what he did when he was in the bureau: he investigated street gangs in Los Angelas, like the ‘Bloods and the Crypts’, he investigated Mexican drug cartels and a group called ‘Hells Angels,'” Gowdy explained.

“So, I don’t think a guy that’s done that for his entire career in law enforcement is going to be intimidated by a tweet or two from anybody. And that’s who made the decision to fire Strzok,” he added. (Video Below)

Strzok was removed from former special counsel Robert Mueller’s investigation upon the discovery of text messages traded with former FBI lawyer Lisa Page that displayed an anti-Trump bias. FBI Assistant Director Candice Will recommended on Aug. 8, 2018, that Strzok be demoted and suspended for 60 days without pay, but Bowdich overruled that decision and the FBI fired Strzok the next day, as reported by Washington Examiner.

Gowdy also praised Inspector General Michael Horowitz who found the anti-Trump text messages between Strzok and his lover, Lisa Page, and noted, “Horowitz is a straight shooter. He did find [the text messages] and deserves a lot of credit for that because if it weren’t for Horowitz, we would never know the person leading the Russia investigation had a historic level of animous toward he claimed to be dispassionately investigating.”

(Related: Trey Gowdy Slams Strzok For Not Suing Robert Mueller In His Lawsuit: ‘Mueller Fired Him’)