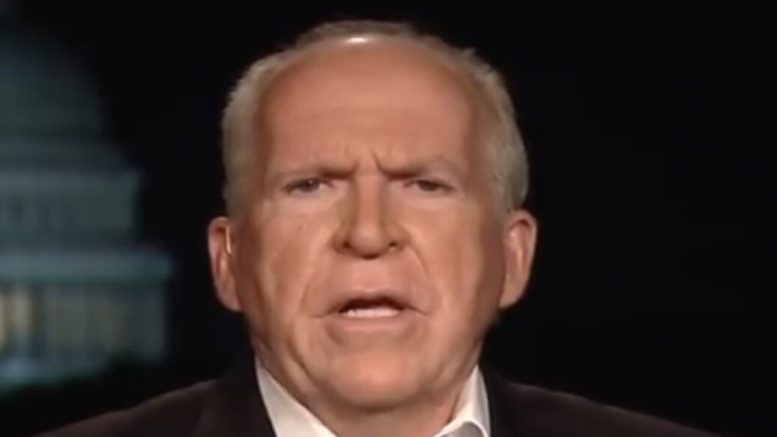 CIA Directors are supposed to be apolitical or at least, appear that way to the public eye. But this is not the case for former CIA Director John Brennan, who openly shows hatred and ire towards President Trump.

Once again, Brennan fired off another attack at the President, and this time ahead of the 2020 elections– aiming to “give advice” as to who voters should elect.

John Brennan took to Twitter on Saturday urging Americans to vote for those who will strengthen democracy: “The stain Donald Trump leaves on our Nation’s soul should be a constant reminder that we cannot assume candidates for public office have the competence, integrity, & decency Americans deserve. In 2020, we need to elect someone to safeguard & strengthen democracy, not trample it,” he said.

This coming from the guy who voted for the Communist Party USA candidate in 1976.

As reported by CNN three years ago, Brennan admitted to a panel that he voted in 1976 for Gus Hall, who was the Communist Party candidate. And Brennan was forced to confess after failing a lie detector test in 1980, when asked if he ever was involved in a plot to overthrow the US government.

At the Congressional Black Caucus Foundation’s annual conference, Brennan said of the failed lie detector test, “This was back in 1980, and I thought back to a previous election where I voted, and I voted for the Communist Party candidate.” (Continued Below)

Brennan tried to smooth over the new revelation at the time by saying, “We’ve all had indiscretions in our past. I would not be up here if that was disqualifying.”

The stain Donald Trump leaves on our Nation’s soul should be a constant reminder that we cannot assume candidates for public office have the competence, integrity, & decency Americans deserve. In 2020, we need to elect someone to safeguard & strengthen democracy, not trample it.

Twitterverse responded and it instantly backfired:

You used the intelligence agencies paid for by the American people to spy on, sabotage, and slander a presidential campaign.

When your attempts to destroy our democracy failed, you attempted to stage a coup of a duly elected president.

Go to hell John, you are a traitor. https://t.co/GYE0Iqe0Wz

You have a GREAT deal of nerve bringing up a SOUL of any type! Stay in your lane John!

I’ll bet you’ve had a lot of stains in your pants lately!

John Brennan talking about “competence” and “integrity” is hilarious.

Wait, you used the word integrity 😂that’s rich coming from the former head of an intelligence organization😂🇺🇸Call your lawyer, you’ll need them soon!🇺🇸@foxandfriends @MSNBC @CNN

“Why Are You Always So Mad, Bruh?”

Why are you always so mad, bruh?

@JohnBrennan Haven’t seen you in the news for a while. I thought you were vacationing on #EpsteinIsland

Karma is a coming for you……🤣🤣 pic.twitter.com/3CVaSYheXb

Translation: We need to elect someone who allows me to be corrupt as possible and let me and my buddies live without any laws.

(Related: Kennedy Fires Back After Brennan Says Mueller Report Has ‘Evidence’ Of Collusion & Obstruction: ‘[He] Needs To Take Off His Tin Hat’)