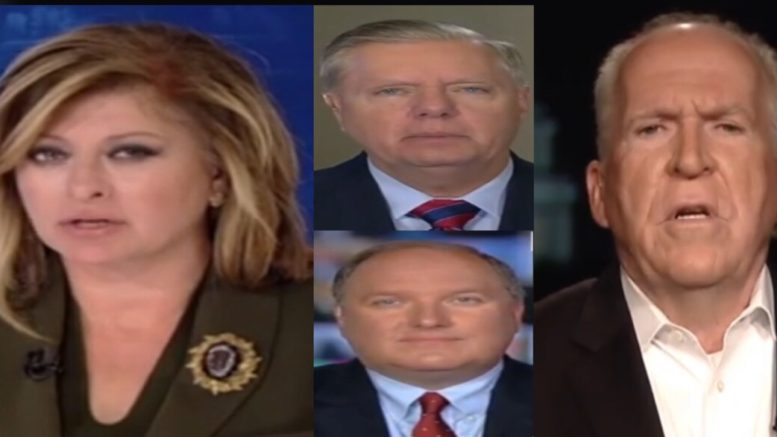 During the segment, both Graham and Solomon suggested that “all roads lead to the CIA”, specifically former CIA Director, John Brennan, who may have been the “mastermind behind the Russia probe.”

Senator Lindsey Graham said that he’s curious about the “role” that the CIA played.

“We know that the FISA warrant application was based on a dossier prepared by Christopher Steele, who was biased against Trump, that was unverified,” Graham said.

“This whole intelligence operation… what role did the CIA play? Who knew about this in the White House? Was President Obama briefed on the fact that they were opening up a counterintelligence investigation against the Trump campaign?” he asked. “I’d like to know that.”

Maria Bartiromo pointed out that “John Brennan was running the CIA at the time,” and she asked Graham if he was going to call in the former CIA Director to testify before his committee. “We’ll see,” Graham responded. (Continued Below)

Asked what he knows about John Durham’s investigation, John Soloman said, “I am hearing that John Durham and Bill Barr are focused on the part before the FBI officially got started on July 31, 2016. The period from March to July, and whether intelligence assets– western, private, or [the] U.S. were deployed in an earlier effort to start probing the Trump campaign in its Russia ties– maybe lay the bread crumb trail evidence Christopher Steele then collected up and gave to the FBI.”

“We know there were certain informants were thrown at the Trump campaign like George Papadopolous. He told me directly on this show that Misfud was the guy that they wanted him to meet in Italy. He had this job at the Center for Law– international law. And they said, ‘Don’t quit yet to go work for Trump, we want to send you to Rome, we want you to meet Mr. Joseph Misfud. That is the individual that told him Russia has emails of Hillary Clinton. Why is that important John?” Bartiromo asked.

“I interviewed Mr. Misfud’s lawyer the other day, Stephan Roe. He told me and he also provided some deposition evidence that both Congress and myself, that his client was being directed and long worked with western intelligence. He was being directed specifically– he was asked to connect George Papadopoulos to Russia… meaning it was an operation, some form of an intelligence operation. That was the lawyers own words for this. If that’s the case, that means the flashpoint that started the whole investigation was in fact, manufactured from the beginning,” Solomon explained. [Emphasized]. (Video Below)

Bartiromo replied, “‘Manufactured from the beginning’… in other words, they put this guy Misfud on George Papadopoulos. He drops a bomb on his lap saying ‘Yeah, Russia has emails,’ with hopes that Papadopolous goes and tells Trump and starts getting them involved in a conspiracy. Meanwhile, he’s working for western intelligence– Misfud is.”

She asked Solomon, “Who do you think is the mastermind?”

Soloman responded, “I think the CIA. We have to take a closer look at them. We are starting to see some sign of it.”