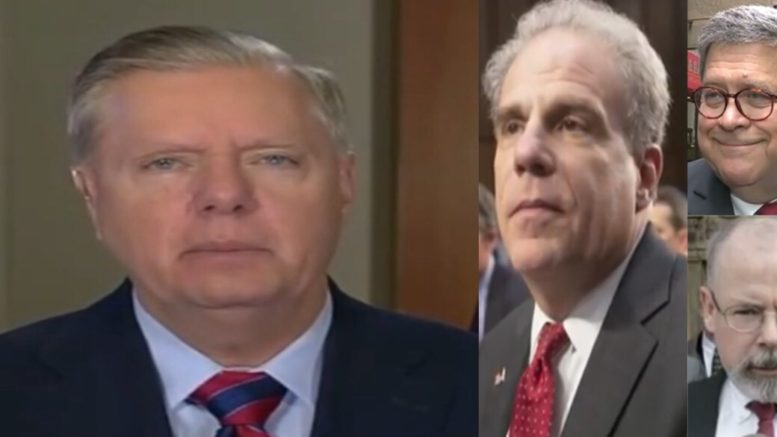 Senate Judiciary Chairman, Lindsey Graham (R-SC), spoke with host Maria Bartiromo on “Sunday Morning Futures” where he weighed in on the upcoming Inspector General’s report that is being prepared by DOJ watchdog Michael Horowitz.

Graham is determined to reveal what went on behind the scenes of the Russia investigation and is looking forward to the American people learning exactly what happened.

Sen. Graham explained on Sunday that there are three investigations of the investigators that are taking place: one by his committee; one by Connecticut U.S. Attorney John Durham, who was appointed by Attorney General Bill Barr to conduct a probe; and DOJ Michael Horowitz’s report.

Referring to Horowitz’s report, Graham said, “I think [it] will be coming out in weeks, not days, not months. And, I believe the Horowitz report will be ‘ugly and damning’ regarding the Department of Justice’s handling of the Russia probe.”

Asked why Horowitz’s report is delayed, Graham replied, “Every time you turn around you find something new. Mr. Horowitz is doing a very in-depth dive about the FISA warrant application, the behavior regarding the counterintelligence operation. He will send his report over to the Department of Justice. They will look at it for classified information.”

Sen. Graham explained he will meet with the Attorney General next week and explained everything he wants to be disclosed. “‘I want to declassify as much as possible.’ I want the American public to hear the story. I want all this information to come out. I don’t want people to believe what I say about it. I want them to read for themselves how bad it was,” he said.

“The warrant application to the FISA court, I think, was frankly a fraud on the court. I want all the communications out where they were on notice that Christopher Steele hated Trump– that he was an unreliable informant. I want the information out that the dossier prepared by Steele, coming from Russia, is unverified to this day,” Graham continued.

“I want the transcripts and interviews with Papadopoulos to be released where it’s pretty clear he was not working with the Russians. ‘I want it all out’; I want people to see how ‘off the rails this investigation got’, and I want people to be ‘held accountable.’ And I am patient, I’m not in a hurry, but I want to do it right,” he expressed. (Continued Below)

Graham said that once Horowitz’s IG report comes out, he would like George Papadopoulos to testify before the Senate Judiciary Committee.

“I’d like for him to ‘tell the world’ what kind of interactions he had, where he had them and what did he say about working with the Russians. And is there verification that he told the informants early on ‘to work with Russia would be treason and a crime– I would never do that’. If he did say that and they went ahead anyway, that raises a lot of concern,” the South Carolina Senator said.

Graham also expressed a desire to find out just who was ultimately responsible for the Russia investigation, saying he is “curious about the role the CIA played here.” He also questioned whether it went all the way to the top. “Who knew about this in the White House? Was President Obama briefed … I’d like to know that.”

(Related: Bartiromo Pieces Together How Brennan Was The ‘Mastermind’ Behind The Russia Probe: ‘At The Time, He Was Running The CIA’)

(Related: Brennan Urges Americans To Vote For Those Who Will ‘Strengthen Democracy’, Instantly Backfires: ‘Why Are You Always So Mad, Bruh?’