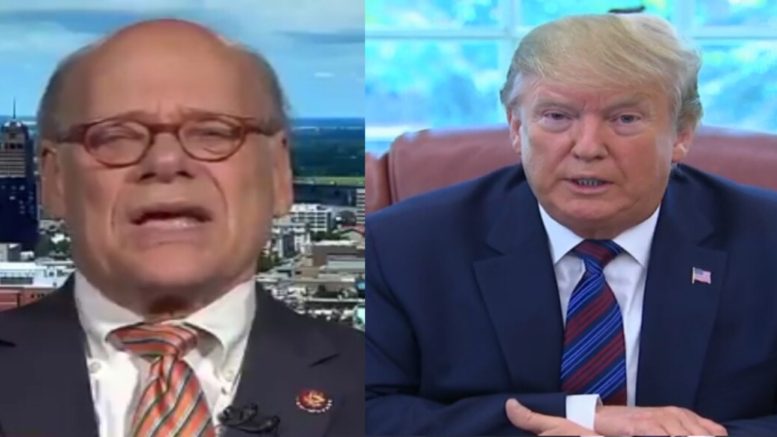 As members of Congress are out for their August recess, Cohen has remained adamant about spreading hate on conspiracy networks and turning the attention away from his own crime-ridden district that is one of the most violent cities in the nation.

Cohen responded, “You never know what Trump will do, he changes from minute to minute, tweet to tweet.”

“The fact is he is a prisoner of the NRA lobby,” he claimed. “He showed it when he met with the Parkland Highschool parents and other survivors in the White House and said he was gonna stand up and that he wasn’t afraid of the NRA. He didn’t do anything. At the last minute he crumbled, or he lied to the parents of Parkland.”

He went on to say that the President is not going to do anything and said that Congress is coming back early to hold a hearing on the Judiciary Committee to vote on a “Gun Violence” bill. (Continued Below)

Next, he claimed, “Trump can say, ‘guns don’t pull the trigger, people pull the trigger’…. well, that’s just using a line and [Trump] shouldn’t be using simple lines. He should be dealing with the issues. The man can’t deal with real issues because it’s all politics. [Emphasized].

Cohen also tweeted, “Following the Parkland shooting, Trump promised action on #GunViolence, but did nothing. I don’t think we can trust him to move forward with #BackgroundChecks or anything else. He’s beholden to the #NRA & motivated by politics. We have to keep up the pressure. #DoSomething”.

It’s worth noting that Cohen never mentions his own district, who has had over 100 homicides recorded in Memphis for 2019. He jumps on the bandwagon when a “crisis” occurs, but fails to address Memphis, TN. (Continued Below)

According to one of the cities local newspapers, The Commerical Appeal, Memphis is trending towards a higher homicide rate in 2019. In 2016, Memphis had 228 homicides to make it the cities deadliest year in two decades.

Did the trigger pull itself on all of these homicides in Memphis, Steve Cohen?

Following the Parkland shooting, Trump promised action on #GunViolence, but did nothing. I don’t think we can trust him to move forward with #BackgroundChecks or anything else. He’s beholden to the #NRA & motivated by politics. We have to keep up the pressure. #DoSomething pic.twitter.com/kKkv4X9ubc

.@HouseJudiciary is returning early from recess to vote on 3 #GunViolence prevention bills. The Keep Americans Safe Act (H.R. 1186) would ban high capacity magazines, like the one used by the shooter in #Dayton, OH. @HouseDemocrats are ready to #DoSomething. Is the @SenateGOP? https://t.co/lXWiSzIG8p