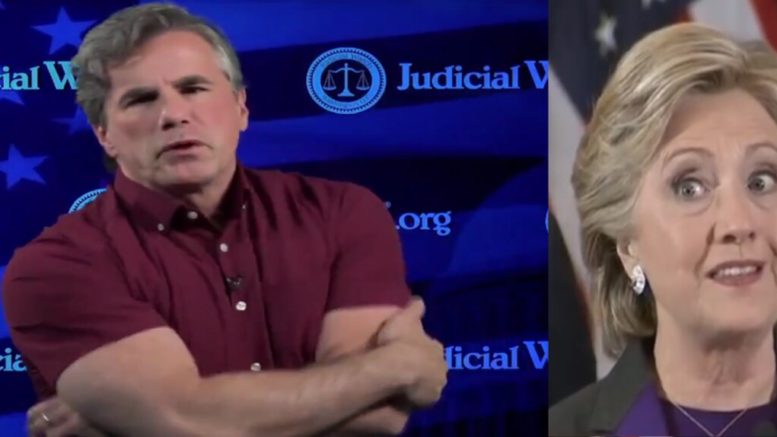 In a new press release, Judicial Watch announced on Wednesday that a federal court ordered a hearing for Thursday, August 22, 2019, on the Clinton email issue.

On December 6, 2018, U.S. District Court Judge Lamberth ordered Obama administration senior State Department officials, lawyers and Clinton aides to be deposed or answer written questions under oath. The court ruled that the Clinton email system was “one of the gravest modern offenses to government transparency,” as per JW.

Lawyers for Clinton and Mills are expected at the hearing Thursday. (Continued Below)

In initially granting Judicial Watch discovery, Judge Lamberth criticized the State and Justice Department for possible “bad faith” and “chicanery”, as per JW.

“Judicial Watch has recently gathered troubling, new evidence about the Clinton email scandal and we hope the court will grant us additional discovery to get more facts,” stated Judicial Watch President Tom Fitton. “And it is outrageous that the Justice Department continues to try to shield Hillary Clinton on her email misconduct.”

President of Judicial Watch, Tom Fitton, said in March, “When all of this over, we may have the opportunity to make the case, if we want, to question Hillary Clinton under oath!” (Video Below)

Judicial Watch is asking for deposition of Hillary Clinton: 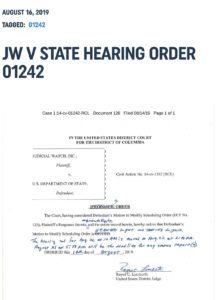 Judicial Watch wants to question Hillary Clinton under oath on her emails and Benghazi. 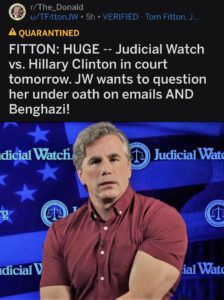 .@JudicialWatch has recently gathered troubling, new evidence about Clinton email scandal and we hope court will grant us additional discovery to get more facts. And it is outrageous DOJ continues to try to shield Hillary Clinton on her email misconduct. https://t.co/QqQALKrVV9 pic.twitter.com/s1nLAwydTz

Not sure whether to laugh or be disturbed. https://t.co/98sVRqFnqP

HUGE–@JudicialWatch vs Hillary Clinton (and DOJ) in court tomorrow. JW wants to question her on emails AND Benghazi!

OUTRAGEOUSLY, DOJ opposes us and objects to any questioning! @RealDonaldTrumphttps://t.co/QqQALKrVV9https://t.co/pNiU3YikDYhttps://t.co/dsy5kosXjh pic.twitter.com/gowlP3TDli