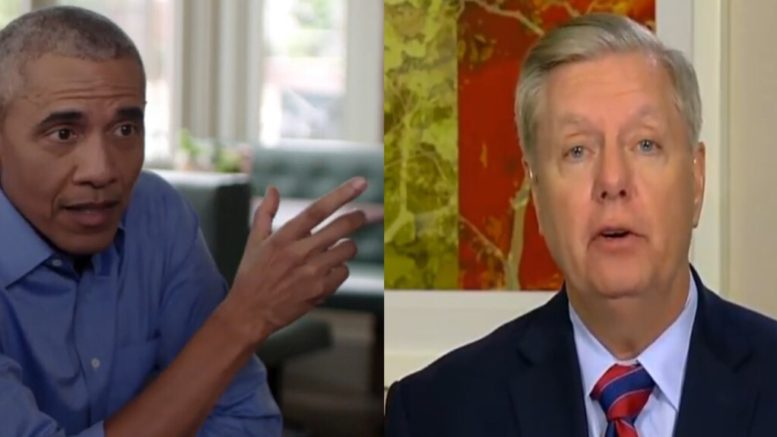 The IG report comes as Obama-era officials “abused their authority to spy on the Trump campaign.”

Senator Lindsey Graham predicted that the Inspector General’s report, upon its release, will receive only sparse coverage from the mainstream media, compared to that for former Special Counsel Robert Mueller’s report on the Russia investigation.

“I think it’s going to be really damning and ugly and people did some really bad things that are dangerous for the country, but you’ll only find it on Fox,” Graham said. “You may find it a little bit in the paper. Here’s what I predict: It’ll be ten percent of the coverage that the Mueller report got, and that’s a shame.”

After the report is released, Graham said he’ll be interested to learn when former President Barack Obama found out about the use of a FISA warrant to spy on then-Trump campaign aide Carter Page.

“Here’s the question: It’s not, ‘What did Obama know and when did he know it?'” Graham asked. “Who told him? And what did he do when he was told? I want to know ‘who’ briefed the president about the counterintelligence investigation against the Trump campaign. When you find that person, you’re gonna unravel the riddle here.” (Continued Below)

Graham also pointed to the case of a former driver for U.S. Sen. Dianne Feinstein (D-CA),– the former staffer was investigated by the FBI for allegedly spying on behalf of China. He said when Feinstein found out about the allegations, she fired the staffer, but no one appeared to tell President Trump about the investigation into people in his circle.

“They tell her and she fires him. Why did they not tell Donald Trump that ‘We believe some people in your organization may have contacts with the Russians’? Why did they tell Feinstein and not Trump?” he asked. (Continued Below)

“Did they abuse the FISA process? Did they defraud the court? Did they open up a counterintelligence investigation, not to protect the country, but to get Trump? These are the questions that will soon be answered,” Graham said.

(Related: Just Days Before Meeting With AG Barr, Sen. Graham Reveals What All He Wants Declassified: ‘I Want It All Out’)

Graham said that he wants the “chart” disclosed to the public that will “tell the truth” about the Steele dossier, which was unverified, but still used to obtain FISA warrants.

“I want to tell the story, I want to declassify everything that we can declassify so the story tells itself. Here’s what I think: I think they put no effort into verifying the dossier until after they got the warrant, and when they tried to verify it, they came up with a dry hole. They’re investigating two people here: Papadopoulos and Carter Page. I bet you Donald Trump did not spend 10 minutes with both of them,” he said.

“Just stay tuned. Weeks from now you’re going to see the Horowitz report and we’re gonna start calling these people to Congress so you hear them– what happened,” he added.