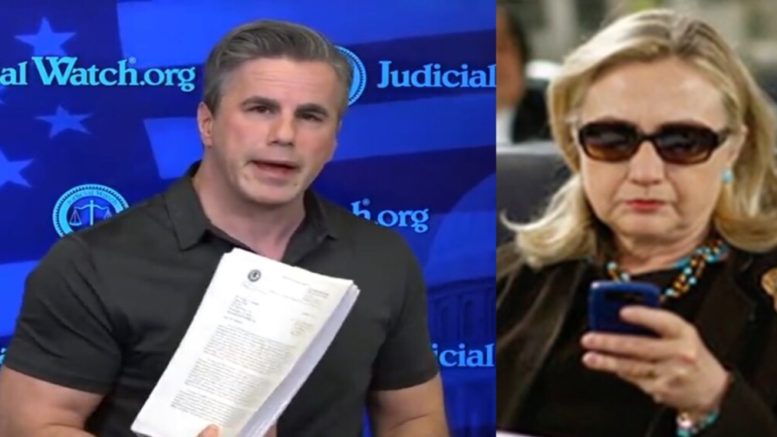 On Wednesday, Swamp Drain reported that Judicial Watch announced a federal court ordered a hearing for Thursday, August 22, 2019, on the Clinton email issue.

On December 6, 2018, U.S. District Court Judge Lamberth ordered Obama administration senior State Department officials, lawyers and Clinton aides to be deposed or answer written questions under oath. The court ruled that the Clinton email system was “one of the gravest modern offenses to government transparency,” as per JW.

(Related: Right Before Their Court Hearing, JW Reveals A Plan To Ask Judge For Hillary Deposition)

Lawyers for Clinton and Mills were expected at the hearing on Thursday. (Continued Below)

Judicial Watch wants to question Hillary Clinton under oath on her emails and Benghazi.

President of Judicial Watch, Tom Fitton, said in March, “When all of this over, we may have the opportunity to make the case, if we want, to question Hillary Clinton under oath!”

On Thursday, Fitton gave un update as Judicial Watch lawyers were in court to get additional discovery.

“At this hearing, we requested additional discovery. Previous to this, Judge Lamberth permitted Judicial Watch to question under oath current and former State Department officials. But as the Judge stated from the bench, that the discovery that has already taken place, raised only more questions rather than answers and agreed with Judicial Watch in permitting all of the discovery that we requested,” Cotca said.

“The only two depositions that are pending before the court are the request for Secretary Clinton’s deposition and Cheryl Mills. The Judge permitted their attornies to respond within 30 days and then Judicial Watch will have ten additional days to reply to that,” she announced. “But, we’ll have the next four months to conduct the discovery that Judge Lamberth just granted.