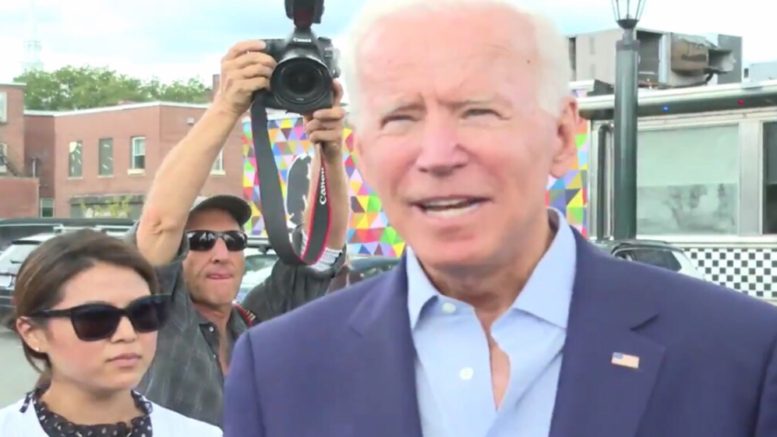 While campaigning in New Hampshire, presidential candidate and former Vice President, Joe Biden, forgot where he was at on Saturday.

A local reporter caught up with Biden and asked him what he thought about the town of Keene, New Hampshire, but his memory got the best of him.

“What is your impression of Keene?” a reporter asked Joe Biden on Saturday.

“I love this place. Look, what’s not to like about Vermont, in terms of the beauty of it?” he asked while he was in New Hampshire.

“What a neat town,” he expressed. ” I mean this is sort of a scenic, beautiful town. The Mayor’s been a good guy. Everybody’s been really friendly. I like Keen a lot.” (Continued Below)

As reported by Washington Examiner, Biden’s mix-up follows a series of gaffes in recent weeks, which have included his confusing Burlington, Vermont, and Burlington, Iowa, his insistence that he was still vice president during the 2018 Parkland, Florida, shooting, and his incorrect claim that 40 students were shot at Kent State University in 1970, among others.

In the same gaggle on Saturday, Biden was asked about concerns from voters over his age.

“I say if they’re concerned, don’t vote for me,” the 76-year-old told reporters. (Video Below)

GOP Chairwoman, Ronna McDaniel took note and wrote on Twitter, “The Democrat Party’s frontrunner doesn’t even know what state he’s in. That’s how lost their party truly is.”

The Democrat Party’s frontrunner doesn’t even know what state he’s in.

In the next video, watch the lady’s reaction when Biden mixes up the states:

But he seems to think his in Vermont.

The lady’s face is priceless. pic.twitter.com/J9aoVVGkUK

(Related: Joe Biden Weighs In On Facing Pres Trump In A Debate: ‘I’d Smack Him In The Mouth’)