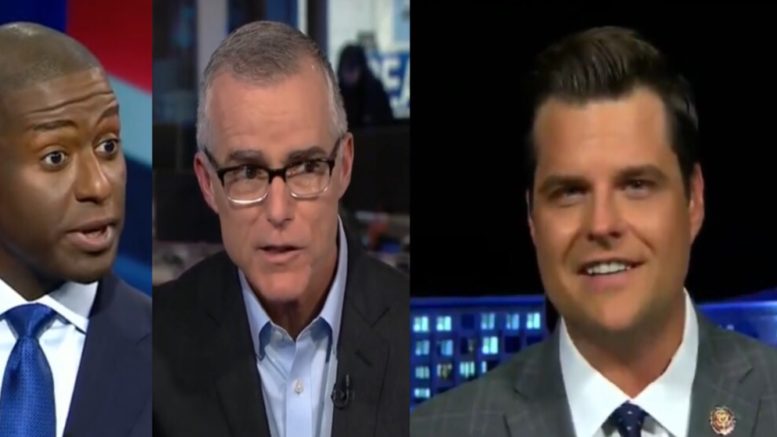 On Friday, it was announced that former FBI Deputy Director Andrew McCabe will join CNN as a network “contributor”, according to the Cable News Network.

Several conservatives and GOP lawmakers responded ripping McCabe after he was fired for lying and for being one of the “ring leaders” involved in the “Russia collusion hoax.”

Congressman Matt Gaetz (R-FL) said on Fox News over the weekend that he hopes with all these contributor contracts CNN is signing, that the network also got the rights to the “lockup” episodes that may follow.

Dan Bongino said to Gaetz, “What better way to reestablish credibility at a network that’s promoting this debunked, disgraced collusion hoax for two years than to hire one of the key figures in it, who was actually under investigation for lying. It’s almost like a bad joke being played on America right now.”

Gaetz responded to Bongino, “Well if it’s facts first for CNN’s motto, it very well may be indictments second because you’ve got Andrew McCabe, who’s probably the target of Mr. Downer’s criminal investigation.”

Joseph Mifsud who, in a 2016 meeting in London with former Trump campaign aide George Papadopoulos, suddenly broached the possibility that the Russians might have emails and dirt on Hillary Clinton. Notably, he had that meeting just after returning from Moscow, and allegedly referred to “thousands of emails.” Papadopoulos later repeated what he had been told to Australian diplomat Alexander Downer in a London pub, and Downer reported that to the American government. Mueller concluded there was no evidence supporting a conspiracy theory against the Trump campaign, and he found no evidence that any Trump official knowingly worked with Russians, as reported by John Soloman of The Hill. (Continued Below)

Gaetz continued, “And this is a troubling trend for CNN– they also hired Andrew Gillum, and recent reporting suggests that Andrew Gillum is also a potential target of the FBI.”

“I hope that in all these contributor contracts, CNN got the rights to the ‘lock-up episodes’, because I cannot wait for the ‘Lock-up CNN Contributor Special’ that is likely to come with their recent hires,” Gaetz expressed. [Emphasized]

Gaetz also tweeted, “It’s not every day CNN can hire someone with ‘failed coup attempt’ on their resume…” (Continued Below)

Andrew McCabe was dealt a stunning blow just days before he would have been eligible for a lifetime pension. He was fired in March 2018, after the DOJ’s Inspector General concluded in his report that McCabe had made an unauthorized disclosure to the news media and lacked candor − including under oath − on multiple occasions.

Michael Horowitz determined that McCabe hadn’t been forthcoming in regard to the handling of the FBI’s probe into Clinton’s use of a private email server while she was secretary of state in the Obama administration.

In May, the Tampa Bay Times reported, Andrew Gillum is a focal point of a recently issued federal grand jury subpoena that demands information on the former Democratic candidate for governor, his campaign, his political committee, a wealthy donor, a charity he worked for and a former employer.

Throughout his campaign last year, Gillum insisted he was not a target of a sprawling FBI investigation of Tallahassee City Hall, which has taken at least three years and resulted in three arrests. Last year, he told the Tallahassee Democrat: “Twenty-plus subpoenas have been issued and not one of them has anything to do with me.”

But the recent one does. Previously, the investigation had centered on corruption inside Tallahassee government, including during Gillum’s time as mayor. The newer subpoena is more focused on Gillum’s 2018 campaign and people and organizations with clear ties to him, but with less obvious connections to Tallahassee City Hall, as per Tampa Bay Times. (Video Below)

This is a troubling trend for @CNN – they’ve hired Andrew McCabe and @AndrewGillum. I hope that in all these contributor contracts, CNN got the rights to the “Lockup” episodes.

I can’t wait for the “Lockup CNN Contributor Special” that is likely to come with their recent hires. pic.twitter.com/6ocrmuyB0t

(Related: Judge Jeanine Bursts Into Laughter, Then Sounds Off After McCabe Is Hired As CNN ‘Contributor’)