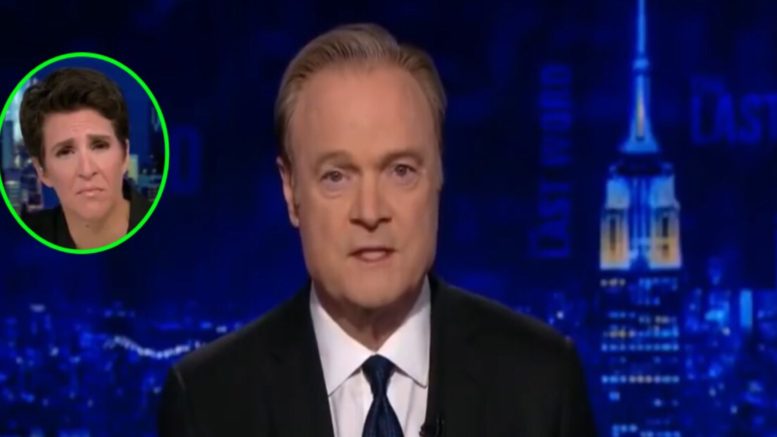 President Trump’s legal team, however, sent a letter Wednesday to NBC demanding an apology and retraction for “false and defamatory, and extremely damaging” comments made by liberal MSNBC host O’Donnell, who ran with a singled-sourced, unverified report.

Lawrence O’Donnell’s revelation came as Deutsche Bank said in a court filing “that it has tax returns relevant to House Democrats’ subpoenas for financial records of President Trump, his family and his businesses,” according to The Hill.

“And that the co-signers are Russian oligarchs,” O’Donnell declared as Maddow dramatically sunk back in her seat. (Continued Below)

Lawrence O’Donnell, however, said Wednesday on Twitter that he made an “error in judgment” in reporting Tuesday night that President Donald Trump’s tax returns showed Russian oligarchs had co-signed loans to his businesses.

O’Donnell issued the statement shortly after President Trump’s personal attorney called on NBC to retract and apologize for the report or face legal proceedings.

“Last night I made an error in judgment by reporting an item about the president’s finances that didn’t go through our rigorous verification and standards process. I shouldn’t have reported it and I was wrong to discuss it on the air. I will address the issue on my show tonight,” O’Donnell wrote. (Continued Below)

The letter President Trump’s legal team sent to NBC news was obtained by Fox News, to which they reported the letter reads: “We write concerning the false and defamatory statements published by Lawrence O’Donnell and NBC Universal. Demand is hereby made that Mr. O’Donnell and NBCU immediately and prominently retract, correct and apologize for the aforementioned false and defamatory statements.”

The letter, written by Charles J. Hader, asked for NBC to confirm in 24 hours: “O’Donnell and NBCU will immediately and prominently retract, correct and apologize for the aforementioned false and defamatory statements,” per Fox News.

“Failure to do so will leave my clients with no alternative but to consider their legal options which could include immediate legal proceedings against Mr. O’Donnell and NBCU,” Hader added.

“These statements are false and defamatory, and extremely damaging. The only borrowers under these loans are Trump entities, and Mr. Trump is the only guarantor. Numerous documents for each of these loans are also recorded, publicly available and searchable online. Thus, actual malice can easily be proven based on your reckless disregard of the truth and unreasonable reliance on an alleged ‘source’ who you will not even identify in your story and likely is seeking to mislead you and the public for political reasons or other ulterior motives,” the letter said in response to O’Donnell’s report.

The letter concludes by stating that if NBC fails to retract the story and apologize, Trump will “pursue all available causes of action and seek all available damages and other legal remedies to the maximum extent permitted by law. (Continued Below)

Last night I made an error in judgment by reporting an item about the president’s finances that didn’t go through our rigorous verification and standards process. I shouldn’t have reported it and I was wrong to discuss it on the air. I will address the issue on my show tonight.

If true, that explains every kind word Trump has ever said about Russia and Putin. @TheLastWord 10pm