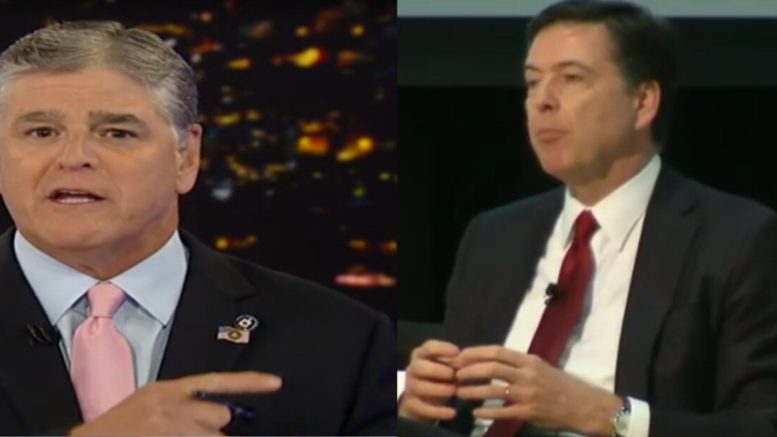 The Justice Department Inspector General, Michael Horowitz, is preparing to release a report on “the conduct” of fired FBI Director James Comey in the Trump-Russia investigation, according to a number of sources with knowledge of the situation.

The Comey report is separate from a larger inspector general report on the DOJ’s handling of the Trump-Russia probe. That report, sometimes referred to by Republicans as an investigation into “FISA abuse,” is expected to be released later, Byron York at The Washington Examiner writes.

On Wednesday, host Sean Hannity of Fox News said that Comey should be “sweating a lot” about the Inspector General report that “could be issued tomorrow.”

“We have been you telling you that we have been expecting the results of four separate investigations into the Deep State. According to our sources, the first of those reports is set to be released soon, as maybe as early as tomorrow. The DOJ Inspector General’s official findings on James Comey are now imminent and it’s not looking good for, well, ‘Mr. Super Patriot’, the guy that knows better than us,” Hannity expressed.

He continued, “We are told that the report will strongly rebuke the disgraced, former FBI Director– document his utter ‘lack of candor’. That means lying. We are also being told that the report, the Inspector Generals putting out tomorrow has referred Comey for federal prosecution for stealing government documents, leaking confidential government memos– detailed conversations with the President, a clear violation of the Espionage Act.”

“In fact, these documents were so sensitive,” Hannity explained, “One month after Comey was fired by Donald Trump, the President– the FBI showed up at that disgraced former Director’s front door to retrieve the memos and interrogate Comey about his rampant misconduct.” (Continued Below)

At the end of July, Swamp Drain reported that Judicial Watch obtained documents in a Freedom of Information Act lawsuit from the FBI showing that FBI special agents were sent to the home of fired FBI director James Comey and collected “as evidence” four memos that allegedly detail conversations he had with President Trump. One of his memos was written on June 6, a month after he was fired.

Hannity went on to say, “However, this is a tiny piece of what the bigger report will be and the three major reports that are coming and without a doubt, Comey should be sweating a lot tonight about what might be in those reports. This report is expected to be the tip of the iceberg when it comes to Jim Comey.” [Emphasized]

He noted in the coming weeks when the Inspector General releases the full FISA abuse report, “Jim Comey is playing a starring role in that investigation.” (Continued Below)

“Remember, he signed three of those FISA applications, all of them he had been warned about on multiple occasions, all of them the bulk of the information–Hillary Clintons bought and paid for Russian dossier. That’s where premeditated fraud on the FISA court for the purpose of spying on a presidential candidate, a president-elect, and a president of the United States were all obtained under false pretenses– fraud before a court and were also used in an attempt to destroy a duly elected president. That’s how serious this all gets,” Hannity explained.

On Tuesday, James Comey tweeted, “Tonight, I told a former colleague that I’m tired of being a Trump critic. He responded with encouraging words that apply to all of us: “Where you see wrong or inequality or injustice, speak out, because this is your country.” He’s right. Keep speaking out.” (Video Below)

Tonight, I told a former colleague that I’m tired of being a Trump critic. He responded with encouraging words that apply to all of us: “Where you see wrong or inequality or injustice, speak out, because this is your country.” He’s right. Keep speaking out.