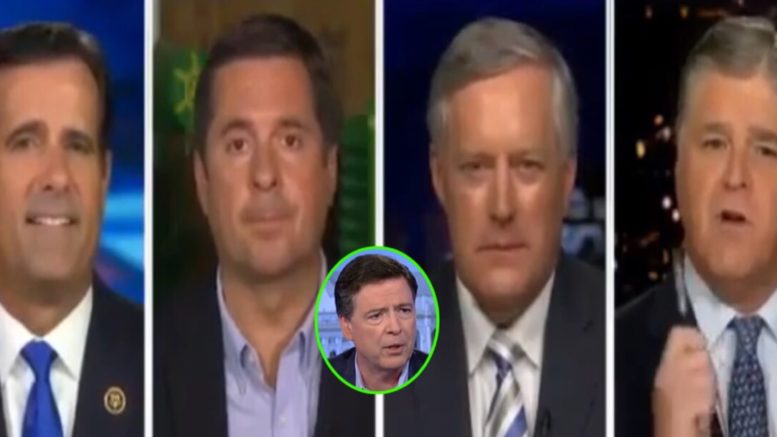 The IG stated that Comey didn’t “safeguard sensitive information” obtained during his tenure as FBI Director and that he “violated standard procedures” in his handling of memos, which were about conversations with President Trump. Further, the IG stated that he set a “dangerous example” for the over 35,000 current FBI employees– and the many thousands more former FBI employees.

“Obviously, today was a bad day for James Comey,” Meadows, chairman of the House Freedom Caucus, told Hannity. He added it was unbelievable that Comey was nonetheless going on Twitter, seeking apologies from his detractors. “Only in Washington, D.C. can you have 70 pages of bad news and expect an apology.”

On Twitter, Comey wrote, “DOJ IG ‘found no evidence that Comey or his attorneys released any of the classified information contained in any of the memos to members of the media.’ I don’t need a public apology from those who defamed me, but a quick message with a ‘sorry we lied about you’ would be nice.”

“Here we are today, with not only the director of the FBI willfully and deliberately breaking protocol, we now understand why Peter Strzok and Andrew McCabe thought what they were doing was OK,” Meadows said. “But I can tell you the Inspector General’s report and the John Durham report coming out, will be more damning than this. And this was not a good day for the FBI’s former Director,” Meadows added. [Emphasized]

Ranking Member of the House Intelligence Committee, Rep. Devin Nunes said that he’s been “very hesitant” to get too far out in front of the IG’s capabilities. “I believe what today is another example, it’s a building block, it’s important information. So, specifically, the House Intelligence Committee Republicans, have referred to the Department of Justice, criminal referrals based on ‘conspiracy,'” he said. (Continued Below)

“Looking at this, what do we know now today? A very important piece of evidence that I think was lost on a lot of people: James Comey came and briefed the Congress in early July 2017. He then went to brief the President-elect Trump. The Inspector General found that he was ‘acting as part of the investigation.’ So, Comey himself was involved in the investigation, followed up with the Crossfire Hurricane team that was running the investigation on the President and his team. They actually determined the classification of this,” Nunes explained.

“[These] are very important pieces of evidence that would build into the ‘conspiracy’ complaint that we have sent to the Department of Justice,” he added.

In April, Nunes submitted eight criminal referrals to the Justice Department, alleging several “potential violations” of the law. (Continued Below)

Asked about the FISA applications and if the word “verified” was on the applications, Rep. John Ratcliffe confirmed it was indeed marked as such. “One thing viewers need to take away from today, Sean, is something that folks haven’t really talked about. Go to page 60, the conclusion of the Inspector General, and it tells you everything you need to know about Jim Comey and every decision that he made throughout all of these investigations,” Ratcliffe said.

He noted that anyone who signed off and worked on the FISA applications is going to get “tremendous scrutiny”.

“The Steele dossier, I can tell you, was front and center in that FISA application. But beyond that, and back to Jim Comey and some of the decisions that were made, information that was not in there that I have seen, exculpatory information that was ‘not’ presented to the court, and that the court should’ve been allowed to look at… ” Ratcliffe said, noting that the Judges were able to look at the Steele dossier and determine the weight and sufficiency that evidence.

“The bigger problem for a lot of folks is there was exculpatory information that wasn’t presented to the court,” he pointed out. (Video Below)

Meadows added they had “credibility problems” with the Steel dossier, so they moved on to the “Comey dossier”, adding, “… which is part of the memos and what they left out. They didn’t tell the President that when they were briefing him– they didn’t tell him that the DNC paid for it.”

“They didn’t tell him that Christopher Steele had credibility problems. It’s what wasn’t in the memos… I believe they were there trying to get information and trying to ‘entrap’ the President-elect at the Trump Tower,” he suggested.

(Related: Jordan Fires Out An Un-Apologetic Response As Comey Calls For An Apology: ‘[He] Owes The Country An Apology’)