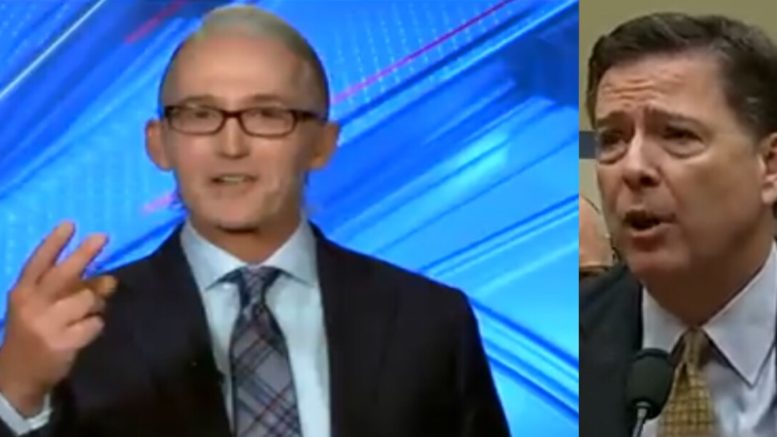 Former South Carolina Congressman, Trey Gowdy, spoke with host Jason Chaffetz Friday, who was filling in for Sean Hannity on Fox News. Gowdy reacted to a tweet from former FBI Director James Comey after the release of the Inspector General’s report.

Comey took to Twitter on Thursday and said apologies from people who “defamed” him “would be nice.”

Trey Gowdy said that Comey is a “two-time offender” as the Inspector General “dinged” him for his handling of the Clinton-email investigation previously. “So now, he gets ‘dinged’ in the other major case he handled in 2016,” he explained referring to the IG’s latest report.

“I never said Comey would or should go to jail. I’m certainly not going to apologize to anyone who violated FBI and Department of Justice policy, who violated an employment agreement, who shared sensitive information about an ongoing investigation, who sent classified information to an unauthorized person and then had amnesia when the FBI came to his home to try to retrieve government property,” the former chair of the House Oversight Committee said.

“I”m not going to apologize to that person, but I will give him a piece of unsolicited advice,” he continued. “You should aspire to more in life than simply skating by without having been indicted.”

“If that is your goal in life to just not meet every essential element of a criminal offense and you think you should be congratulated and apologized to for simply because you were not indicted, you better give back some of those ‘Higher Loyalty’ speaking fees,” Gowdy added — referencing Comey’s recent book title. (Continued Below)

“Jim Comey, whether he likes it or not, all of his past in the Southen District of New York, all of his past at main justice, all of his time as an FBI Director– some of which I agreed with– all of that will be forgotten. God in history will be all our judges, but they will judge Jim Comey based on the fact that he got ‘dinged’ on both of the major investigations he was handling in 2016 by the Inspector General,” Gowdy reiterated. That will be the accountability; that’s what history will remember about Jim Comey.”

(Related: Rep. Collins Reveals Why Comey & ‘The Corrupt Cabal’ Should Still Be Worried: ‘We Still Have A Lot Left To Go’)

Chaffetz asked Gowdy to confirm whether or not he would apologize to Comey for being critical of him. “What temperature is it in hell right now? Is it snowing?” Gowdy asked. “When it snows in hell, you let me know.” [Emphaszied] (Video Below)

“Why would I apologize to somebody that’s been ‘dinged’ on both of the major investigations by a guy like Michael Horowitz, who’s hardly a Republican!” Gowdy expressed. “He was picked by Obama and confirmed by the Senate, I think without a descending vote. That’s who said [Comey] screwed up. It wasn’t a Republican congressman. So, no. That’s a fancy way of saying no.”

(Related: Jordan Fires Out An Un-Apologetic Response As Comey Calls For An Apology: ‘[He] Owes The Country An Apology’)