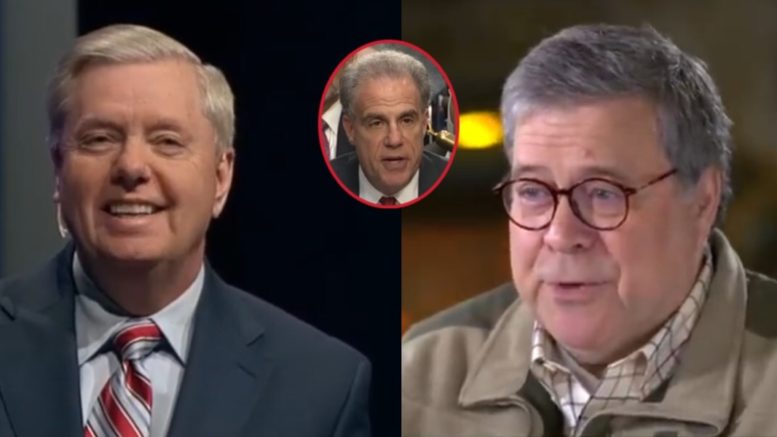 On Monday in an interview with on Fox News’ “America’s Newsroom”, Chairman of the Senate Judiciary Committee, Lindsey Graham (R-SC), announced during the segment that he wrote a letter to Attorney General William Barr asking him to allow the public to see “as much declassification as possible” from the DOJ watch dog’s report.

Graham told anchor Sandra Smith on Monday, “I want the public to see the process in real-time. I want the FISA warrant applications to be revealed to the public as much as possible.” [Emphasized]

In order for the Inspector General to be able to present the most complete results of his investigation to Congress and the American people, certain documents will need to be declassified and released to the public. I write to urge you to declassify all documents the Inspector General identifies as appropriate for declassification as much as possible, without harming national security.

From my review, the following classified documents, at a minimum, should be declassified in order to provide a complete picture of what went on with the FISA process as it relates to Carter Page and the Trump campaign: (Continued Below)

On Monday during Graham’s interview on Fox News, he noted, “And this is not revenge, this is just accountability.”

(Related: Sen. Graham Sends AG Barr A Letter & Calls For ‘Declassification’ Of FISA Abuse: ‘This Is Not Revenge, This Is Accountability’) 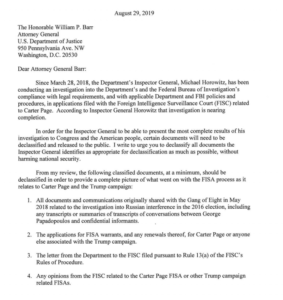 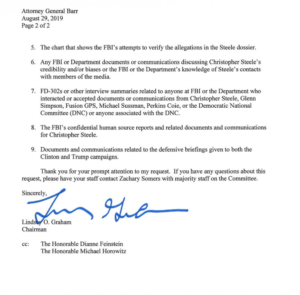 (Related: Sen. Lindsey Graham On Upcoming IG Report & FISA Abuse: ‘What Did Obama Know & When Did He Know It?’)