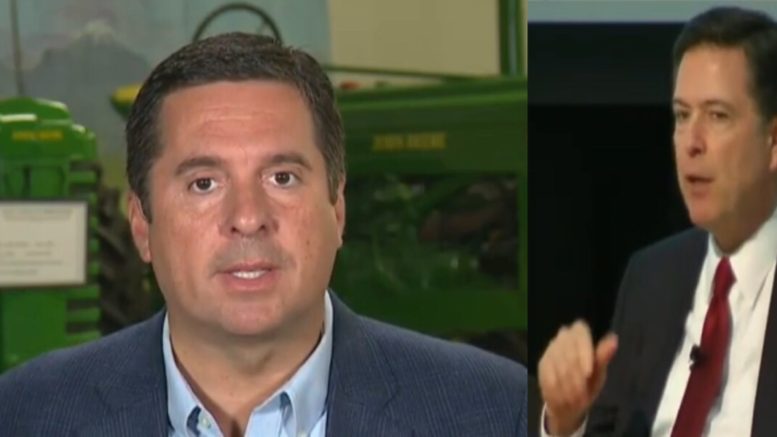 The IG report explains that Comey “violated standard procedures” during his time in the Trump administration; stating he set a “dangerous example” after leaking and that he set a dangerous example for the over 35,000 current FBI employees by not safeguarding sensitive information obtained during the course of his FBI employment.

Rep. Nunes believes that what James Comey was “really doing” was “interrogating the President and then using that information to feed it right back into the Crossfire Hurricane team at a time when Congress nor the president-elect knew he was under investigation. “Crossfire Hurricane” was the “code name” for the FBI’s Russia probe.

In April, Nunes sent criminal referral notifications to Attorney General William Barr on several “potential violations” of the law. Two of the referrals involves “conspiracy” and stem from the investigation conducted by the House Intelligence Committee when Republicans held the House majority.

Nunes explained that even though the DOJ did not prosecute Comey for violating department policies — in the handling of his memos documenting conversations with the President, as well as passing along documents with the intention of leaking information — there is a “tremendous amount of evidence” that would build a case for “conspiracy.”

The Ranking Member on the House Intelligence Committee noted that Comey was “acting as an agent” for the “Crossfire Hurricane” team. “That is clear evidence that he was involved in this, where before he’s tried to pretend he’s like a step or two away from what happened. He always pretends like he doesn’t know what happened with the FISA situation, he doesn’t know what happened with the intelligence. Well, the IG report really makes clear that that’s not the case when you read through 80 pages,” Nunes said. (Continued Below)

“We know that Bill Barr has asked the U.S. Attorney in Connecticut [John Durham] to look at ‘everything.’ The origins of this investigation. Because remember, in the Mueller report that came out, even though it cleared and exonerated Donald Trump, it really didn’t answer the very basic questions that we’ve been looking to as House Republicans,” Nunes explained.

“Who were all these characters that started this investigation? How did this begin? How do you use our secret, most powerful capabilities in this country that are designed to go after foreigners– go after bad guys… How does that system get turned around to target an American political campaign for President, none the less?” he asked.

He noted those are the type of questions Durham needs to answer. “From that the evidence we’ve gathered over our 2 and half year investigation, we’ve made specific criminal referrals, specifically on ‘conspiracy’ to fraud the FISA court,” Nunes said. (Continued Below)

Nunes reiterated that Comey “always” pretended he was not a part of that, but noted that James Comey signed the FISA applications.

“If you look at now, he was actually being used to run in and actually brief the President, but really what he was doing was actually ‘interrogating’ the President, and then, using that information and feeding it right back into the ‘Crossfire Hurricane’ team, at a time when Congress, nor the President-elect, knew he was under investigation,” he added.

Nunes concluded he believes Comey and his team ran the “entire” Russia probe under “so-called counter-intelligence because you can go to secret courts.”

“You know … really the question that we need to have answered is…how did they get to decide what was classified or not classified? I think that’s a very important question.” (Video Below)

(Related: Gowdy Reacts After ‘Two-Time Offender’ Comey Asks For An ‘Apology’: ‘What Temperature Is It In Hell Right Now?’)