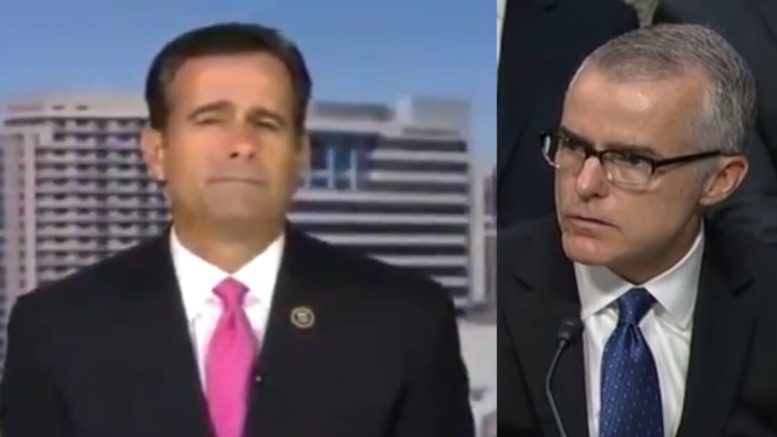 Ratcliffe also weighed in on the IG’s Comey report that explains that former FBI Director, James Comey, “violated standard procedures” during his time in the Trump administration; stating he set a “dangerous example” after leaking and that he set a dangerous example for the over 35,000 current FBI employees by not safeguarding sensitive information obtained during the course of his FBI employment.

“The first IG report [Comey] was just a sliver. Jim Comey handled the memos that he created of his conversations of President Trump, some of which contained classified information and of course, the Inspector General found that Jim Comey mishandled that– disclosed it without authorization, much like Hillary Clinton though, despite mishandling classified information, he was not charged,” Rep. Ratcliffe said.

He noted that people should feel good about the fact that the Inspector General has criminally referred the former Director of the FBI and the former Deputy of the FBI: James Comey and Andrew McCabe.

“So where does that stand though? We know the IG has referred criminal action with Andrew McCabe and he’s just got a job on another network and he’s going about his life. Jim Comey no charges so far… so what are you expecting in terms of this decision that the DOJ needs to make in terms of a potential indictment of Andrew McCAbe?” Maria Bartiromo asked. (Continued Below)

“I think a lot of people have an interest in that, and I think that’s a decision that has to be made very quickly,” Ratcliffe said.

Ratcliffe explained that last year the Inspector General found that former Deputy Director Andrew McCabe authorized the disclosure of sensitive investigative information to the media and repeatedly lied about it to investigators.

“The Department of Justice, through the special counsel, recently made a cottage industry out of charging people like General Flynn and George Papadopolous for lying to investigators. Here you have the Inspector General stating that Andrew McCabe did that multiple times and the magic words is: ‘did so intentionally and knowingly,'” the Texas Congressman noted. (Video Below)

“I think that the Department of Justice is going to have to indict Andy McCabe, simply because to do otherwise, would be to admit that there are separate standards for the people doing the same thing for the same conduct,” Ratcliffe revealed. [Empahsized].

Asked if he thinks the DOJ will indict McCabe, Ratcliffe responded, “I don’t know how you can’t indict him when he is engaged in the same conduct that other people have recently been charged for at the Department of Justice, particularly when your own watchdog says that those lies were done intentionally and knowingly and done repeatedly.”

“You can’t really tell the public ‘Look we’re gonna treat people differently with different standards for the same conduct.’ I think that’s what the Department really has to look at and why they have to ultimately and strongly consider bringing those charges against former director deputy McCabe,” he added.

Rep. Ratcliffe’s full comments in the two videos below:

.@RepRatcliffe tells @MariaBartiromo he thinks Andrew McCabe will be indicted. He says they almost have to after people like @GenFlynn and @GeorgePapa19 was charged. pic.twitter.com/6k2RrlvwNf

We leave you with the rest of Rep. Ratcliffe’s interview:

.@RepRatcliffe says he just didn’t have the support he was wanting. pic.twitter.com/b8YEcE9fLe

(Related: Sarah Sanders Breaks Her Silence On The Fmr FBI Director: ‘He Is Lucky That He’s Not Already In Prison’