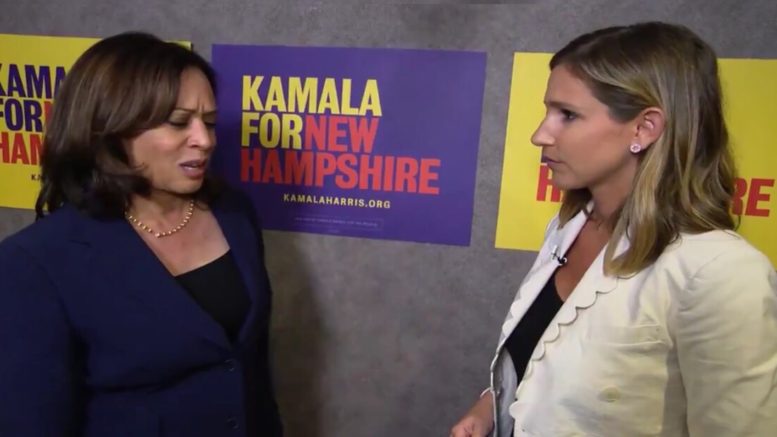 When confronted about the remarks on Saturday, Harris, however, claimed she did not hear the derogatory statement and called the remark offensive.

CBS News reporter, Caitlin Huey-Burns caught up with Harris on Saturday and asked about the exchange during a New Hampshire Democratic party rally. “It’s an incredibly offensive term,” Harris said of the “mentally retarded” term.

“It’s offensive, and you would think that in the year 2019, people would have a much better understanding how hurtful a term like that can be but also the history behind it, which is the history of really ignoring the needs and the realities and the capacity of our disabilities community.” (Continued Below)

“You didn’t correct him though. Did you hear him?” Burns asked Harris.

“I heard him talk about the other stuff. And then that came later. And it was not something that I really heard or processed, or you know, in any way condone, that’s for sure,” Harris claimed.

However, Sen. Harris got blasted on social media as people did not believe that she “did not hear” her fan call President Trump “mentally retarded.” (Video Below)

The man spoke into a microphone. You responded, “Well said. Well said.” pic.twitter.com/VR1Tw9iM5U

Several people, however, did not believe Sen. Harris after she claimed she did not hear the man use the term “mentally retarded.”

Wayne Dupree wrote, “Harris claims she didn’t hear the man call Trump ‘mentally retarded,’ even though she laughed ==> We all know she was ‘clearly lying'”.

Harris claims she didn't hear the man call Trump
"mentally retarded," even though she laughed

==> We all know she was 'clearly lying'https://t.co/bugDo7xjys

Jim Hanson said, “Kamala Harris says she didn’t hear the guy say mentally retarded, while responding directly to his smear She’s a liar and a bad one.”

#KamalaHarris says she didn't hear the guy say mentally retarded, while responding directly to his smear

She's a liar and a bad one https://t.co/P08kktxAdX

Kamala Harris hates the developmentally disabled but not adultery.

Now she says she "didn't hear him."

But her laugh indicates otherwise 👇

You're a liar, Kamala.

Which is why you laughed and said “Well said” 2x?
What won’t you lie about?

This is the, what, 7th or 8th time that Harris has claimed impaired hearing to excuse herself from accountability in the campaign?

You told him “that’s a great way to put it” but, okayyyyyy

Just admit that you have no problem with the word. It’s fine.

A better response would be to say, “I didn’t realize how the word affects some people and I apologize for being unkind.”

She upset with the word but fine that he referred to Trump as such.

This becoming the “walk it back” party

Liar. This woman heard the man VERY LOUD and VERY CLEAR. This woman will do and say anything for votes.

And if you truly cannot “process” what is being said to you, then remove yourself from the running because you are lacking fundamental comprehension skills.