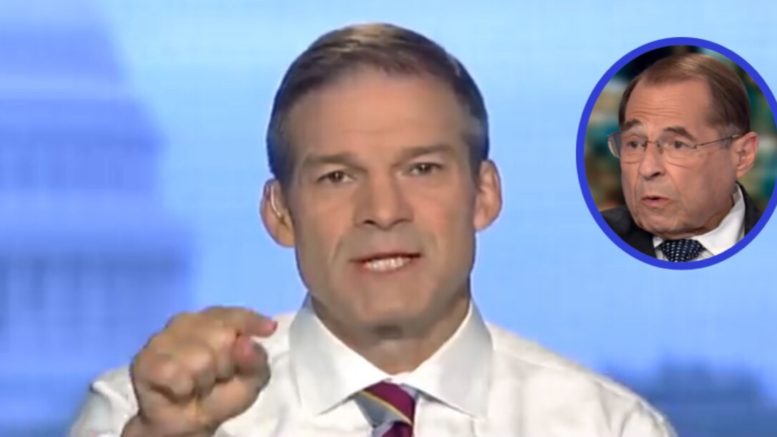 As per Fox News, Democrats on the House Judiciary Committee are looking to formally define what Chairman Jerrold Nadler, D-N.Y., has referred to as impeachment proceedings against President Trump. Democrats on the committee are planning on voting on how the investigation is defined, through a resolution that would set the boundaries of the probe, Politico reported.

Asked what Jerry Nadler has on his agenda upon returning from Congress’ August recess, Rep. Jordan said, “Who knows, we haven’t seen the resolution. They say they’re gonna vote on something this week.”

“When they’re focused on this warrantless impeachment inquiry, you’re not getting done the things we need to be doing, like fixing the border situation — dealing with the intellectual property theft of China. Things we’re supposed to deal with on the Judiciary Committee,” he continued.

Last month, Justice Department Inspector General, Michael Horowitz, issued a scathing report detailing how Comey violated FBI policy when he leaked information about discussions with President Trump to the media and his lawyer. Last year, the Inspector General also criticized Comey’s handling of the investigation into Clinton’s use of a private server for emails while she was Secretary of State. (Continued Below)

“Why aren’t we having Michael Horowitz in for a hearing? He just issued a scathing report about Jim Comey, the former FBI Director and nothing has been scheduled to bring in Mr. Horowitz to answer our questions,” Jordan pointed out.

“When you’re solely focused on going after the President you can’t do what’s best for the country. And that’s been the problem with the Democrats,” he added in response to Democrats not doing anything useful for the America people.

“So, [Comey’s] the guy who created this whole darn mess and yet, we’re not gonna bring him in after the scathing report by Michael Horowitz? We’re not gonna bring in the Inspector General to answer questions? That’s ridiculous! They’re so focused on impeachment, they’re missing, I think, the important things that we should be addressing,” he expressed.

Jordan also tweeted on Monday, “Congress just got back from August recess. @RepJerryNadler’s first order of business: begin taking steps to impeach the President and take our guns away. This is the Left today.”

Rep. Mark Meadows (R-NC) also took to Twitter Monday and wrote, “Congress returns this week with what should be an obvious to-do list: secure the border, pass the President’s pro-American worker trade deal, and lower healthcare prices. But what is Congress doing? Launching more pointless investigations. This is your House Democrat majority.”

In April, Reps. Jordan and Meadows sent a letter to urging Chairman Elijah Cummings (D-MD) to call for Horowitz to testify upon completion of his probe. (Video Below)

Congress just got back from August recess.@RepJerryNadler’s first order of business: begin taking steps to impeach the President and take our guns away.

This is the Left today.

Congress returns this week with what should be an obvious to-do list: secure the border, pass the President’s pro-American worker trade deal, and lower healthcare prices. But what is Congress doing?

This is your House Democrat majority.