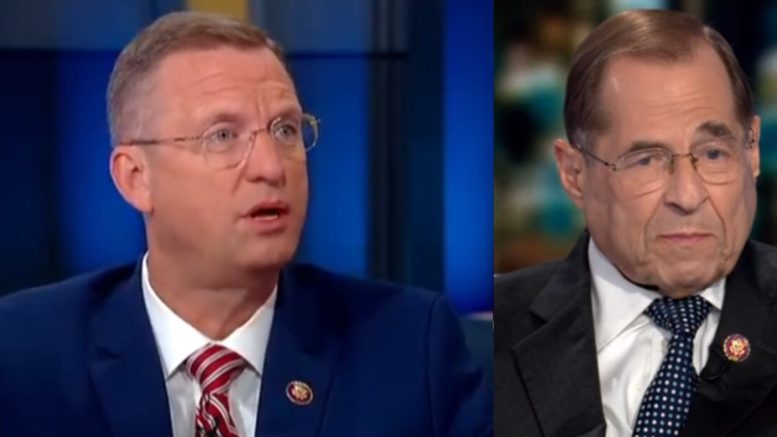 This comes as Chairman of the Judiciary Committee, Rep. Jerry Nadler (D-NY) is preparing to vote on ‘defining’ Trump impeachment rules.

“What we’re finding out is Chairman Nadler is trying to pull a fast one on the American people again. They know they don’t have the votes to go for a full, formal impeachment inquiry, which is what our House rules require,” Rep. Collins said. “So what they’re doing is they’re gonna try and change our rules, and it’s really sad because what they’re trying to make it look more ‘impeachment-like.'” [Emphasized.]

“They want to make it look like they’re doing something they promised their base because they’ve been out promising that they would get this President. The sad part about it is they want people to believe something that is not true. They want to continue to put a false narrative out there. When does it cross the line of becoming a House Judiciary Committee and when do they become just being part of the DNC’s campaign operation for next year?” he asked. [Emphasized.]

“It’s really become a ‘pitiful scene,'” Rep. Collins continued, adding that Democrats are being driven by a personal hatred of Trump

“Frankly it’s a hatred of this President. They hate Donald Trump,” the Ranking Member said. “Since November 2016 they’ve done everything they can to portray him as a bad person who shouldn’t have got elected. But in actuality, we have an economy that’s the best we’ve ever seen, we see our standing across the world has improved, we’ve seen unemployment down.” (Continued Below)

“Instead, we’re chasing these rabbits to please a vocal minority of their base because they want to prove that they’re tough on this president,” Collins continued. “At the end of the day, I just wish the Chairman would be the Chairman and let’s work together, find those ways. We understand we’re going to disagree. But quit going after the President.” (Video Below)

Rep. Collins released a statement in August after the Judge smacked down the Democrats attempt to get secret Grand Jury information: “As I have been saying for months, Democrats have not begun an impeachment inquiry against the president. Until the full House votes to authorize such an inquiry, that status will not — indeed, cannot — change. The chairman’s public statements notwithstanding, these two lawsuits are separate and distinct from each other, as Chief Judge Howell’s ruling makes clear.”

Rep. Doug Collins also tweeted on Monday, “Judiciary Democrats are trying to pull a fast one on Americans. They know they don’t have the votes for the whole House to impeach, so they’re trying to adopt committee rules to govern an ‘impeachment investigation’ the House hasn’t even authorized.”

Judiciary Democrats are trying to pull a fast one on Americans. They know they don’t have the votes for the whole House to impeach, so they’re trying to adopt committee rules to govern an “impeachment investigation” the House hasn’t even authorized.https://t.co/RAJHFLo9wu