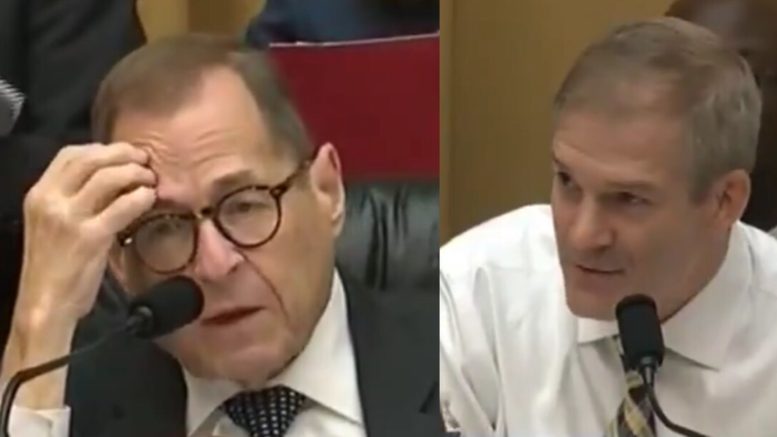 The committee met to consider gun violence prevention bills and other legislation.

“When will the committee get a chance to question Mr. Horowitz on this report that was released two ago?” Rep. Jordan asked Chairman Nadler.

“I’m not sure which report you’re referring to,” Nadler responded.

Nadler replied, “The answer is I don’t know.” (Continued Below)

“Do you anticipate us having an opportunity to question the Inspector General,” Jordan asked again.

Nadler repeatedly answered, “I don’t know, we haven’t discussed that,” to which Jordan responded and asked, “You don’t know?”

Jordan persisted: “You don’t know if the Judiciary Committee is going to get an opportunity to question the Inspector General of the Justice Department, who issued a scathing report on the former FBI Director?” (Continued Below)

Nadler again dodged the idea but said they would do it at the “appropriate time.”

“I’m asking when that appropriate time is,” Jordan said. But Nadler ignored him, returning to discussing gun control legislation.

“Mr. Chairman, if I could raise one last point,” Jordan tried again.

“No. I recognize the gentleman as out of order. He asked his question. That’s it,” Nadler replied, shutting down further talk about Horowitz.

The Justice Department declined to prosecute Comey on Horowitz’s referral from his investigation into the former FBI director’s handling of sensitive memos. But the DOJ watchdog, who criticized Comey in a report last year for his handling of the FBI investigation into Hillary Clinton’s private email server, is now wrapping up an inquiry into alleged surveillance abuses that could also spell trouble for Comey, as per The Washington Examiner. (Video Below)

On Monday, Jordan said in an interview with “Fox & Friends” that people ask him all the time, “when someone’s going to jail” over alleged wrongdoing in the Trump-Russia and Clinton email investigations. “That’s the question, more often than not, when I’m walking through an airport or something, people walk up to me [and ask], “When is someone going to jail for the wrongdoing that took place in the Trump-Russia investigation? Or even the Clinton investigation?” he said.

In April, Reps. Jordan and Meadows sent a letter to urging Chairman Elijah Cummings (D-MD) to call for Horowitz to testify upon completion of his probe.

When will the Judiciary Committee get to question IG Horowitz about his scathing Comey report?@RepJerryNadler: "I'm not sure which report you're referring to… I don't know. We haven't discussed that."

Dems would rather focus on impeachment and taking our guns. pic.twitter.com/hnF4MnsTvK