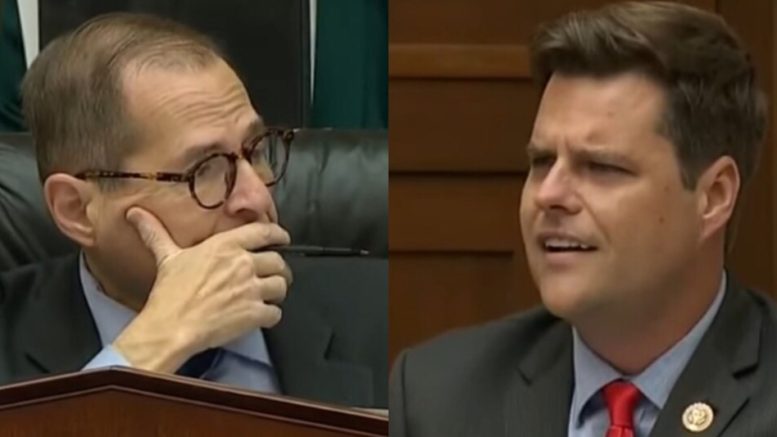 House Judiciary Democrats on Thursday ramped up their “Trump impeachment push” after returning from their August recess, as they “set the ground rules for a formal committee inquiry,” but Republicans, however, called out the Democrats effort to move the needle before the committee voted.

Rep. Matt Gaetz (R-FL) said in his opening that he doesn’t know what the majority’s “obsession” is with having “staff members” ask questions of witnesses in their proceedings.

“We have talented litigators, even former Presidential candidates, who serve on the committee,” he said referring to Rep. Eric Swalwell (D-CA). “I don’t understand why this important task would be delegated to those who have not run for office, been elected and been asked to serve this agust body.”

He revealed that after talking to some of his Democratic colleagues that there is some “regret” over Chairman Nadler’s (D-NY) decision to place committee staff’s ability to ask questions over having the Attorney General testify to the committee. He was referring to when AG Barr declined to appear before the committee in May.

“I actually think it’s quite disappointing that we’ve not heard from the Attorney General during our time, and I think we would have, had the majority been willing to allow the Attorney General to come and merely respond to questions from members of the committee. But this kind of paradigm of hiring ‘CNN contributors’ onto the staff and then trying to turn our committee hearings into some sort of a reenactment of a CNN show is probably less productive than allowing our members to ask pointed and substantive questions,” Gaetz explained. (Continued Below)

“If we zoom out a little bit and sort of ask ourselves why we are here, it may be important to note throughout all the majorities theatrics they have failed to move the needle at all when it comes to the people in this country,” Gaetz continued. “In fact, it was a Monmouth University poll on August 23rd that found that only 35% of Americans support ‘impeachment’ and 59% Americans oppose ‘impeachment.'”

“If we just check the scoreboard, my friends, we’ll find that you’re losing and you’re not making up any ground, despite the fact that over and over again you try to smear the President of the United States with false accusations,” he bluntly announced. “I don’t know what to quite call this, the Chairman mentioned he wouldn’t be debating the lexicons on whether this was ‘impeachment inquiry’ or an ‘impeachment investigation’. I’ve called it ‘impeachment in drag.'”

“Because we’ve sort of dressed up impeachment like an oversight hearing. Perhaps it’s ‘low-T impeachment’, or ‘low energy impeachment.’ But I would suggest or hope at least, these proceedings are not more about the Chairman’s upcoming primary challenge than about the important work of the committee and about the country,” Gaetz declared as groans could be heard in the room. [Emphasized]. (Continued Below)

“Moan and groan all you want, because we’ve got circumstances here where you guys can’t move the country,” Gaetz shot back. “You don’t have any support for this endeavor so we kind of lurch along with you know… it’s like a Seinfeld here. It’s a hearing about nothing. It’s a hearing about whether or not when we have people come [to] give testimony.”

Gaetz went on to pound Nadler next on what the Obama administration did to frame President Trump before and after the 2016 presidential election: “We should be determining what corrupt entities within Obama White House fanned the flames of the lies that President Trump was engaged in a criminal conspiracy. We should investigate how someone like Joesph Misfud can make things up, can launch us into this bizarre fact-pattern and then ‘disappear’– like out of thin air, without any desire to find out why that happened.”

“And we most certainly, should be investigating the FISA abuses where Jim Comey and other actors within a very corrupt deep state perpetrated a fraud on the FISA court. They went before a judge with a defense attorney and they didn’t present all the facts and evidence,” Gaetz said. “And they did that so that they could shoe-horn a secret court to giving them authorities that no government should have– to weaponize political opposition research within the confines of our really important investigative work.”

Then he declared, “What [John] Brennan and [James] Comey and [James] Clapper and [Andrew] McCabe have done to our country is deeply damaging. And it was my hope, that as members of the Judiciary Committee, we could come together, we could root out this corruption and could ensure that it never happens again to another President.” (Video Below)

The Florida Congressman concluded, “But in the meantime, can we at least adopt this amendment and least be willing to stand behind our own arguments and our own questions as members of the United States Congress and members of the Judiciary Committee, or is it the desire of the majority to delegate and schluffle off this important task to members of your CNN staff? I certainly hope that’s not the case.”