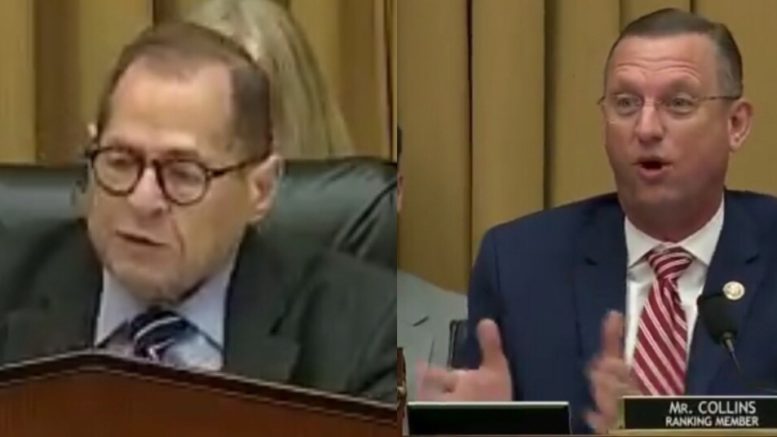 House Judiciary Democrats on Thursday ramped up their “Trump impeachment push” after returning from their August recess, as they “set the ground rules for a formal committee inquiry,” but Republicans, however, called out the Democrats effort to once again “pull a fast one” on the American people, before the committee voted.

“Thank you, Mr. Chairman. I welcome everyone here who was expecting one thing and getting another,” Rep. Collins began in his opening statement.

Collins continued by painting a story to describe the Democrats’ effort: “Last week I was driving to a great event– it is the opening of football season at the University of Georgia. We’re going between the hedges, the day was starting as our first home game. My wife and I are driving down the road and she’s looking at her phone, bored, and she’s looking [at her] Instagram account.”

“She looks over at me and she shows me a picture of this person, it’s a family member, it’s a close member, [and] she looks over and she says to a friend that’s staying with us, ‘Megan told me about filters that you can use to make your appearance look better.’ And I said, ‘Yeah, what are you talking about?’ She said, ‘Well, look at this picture, it looks nothing like our family member. What did she do?’ And I said, ‘Well, Lisa, I don’t know. Undoubtedly she refused one of the filters,'” Collins said. (Continued Below)

“What’s happened today is great! The Judiciary Committee has [become] a ‘giant Instagram filter’ to make you appear that something’s happening, that’s not,” Collins declared. “The difference between formal impeachment proceedings and what we’re doing today, is a world apart, no matter what the Chairman just said.”

“What we’re looking at here is a filter to make you believe something! It’s great though. I love this. I haven’t seen this much press at 8’oclock in the morning in a long time. When we look at this though, let’s look at the facts. Nothing we have here is anything that could not have been handled five minutes before a hearing of anytime that we’ve had. The filter may make you think something’s happening, but really what we have is a walk down the ‘Yellow Brick Road.’ In fact, you want to see the ‘Yellow Brick Road?'” he asked.

“Let’s go to the ‘whereas closets.’ The Emerald City is impeachment. And my colleagues are desperate to get there. They have been ever since last November when they won the majority. And they started this path, this walk… look at the whereas closets on what they’re doing and how they’re doing it,” he noted. (Continued Below)

Collins pointed out in the second paragraph of the Democrat’s resolution for their “impeachment inquiry” that it admits “the Russian government interfered in the 2016 election”, yet no hearings and no bills have been brought forward in the committee to deal with that issue.

“Now that we’ve acknowledged it, like we’ve done in this committee, but we don’t want to solve it… because we’d rather talk about it. So we continued the ‘whereas closet.’ We continue this, the ‘Yellow Brick Road’. What’s interesting is all along they thought people were coming along with them and that the public was happy with it, and other members in their own party were happy with this. Somewhere down the ‘Yellow Brick Road’, they looked around and said, ‘There’s not all of us here. People aren’t following anymore,'” Collins continued while stating the truth.

Pointing to the Democrats resolution, he announced, “This is not anything special. In fact, let’s talk about it. Number one: ‘The Chairman may designate a full sub-committee hearing for the purpose of presentation of information of this committee.’ Oh my goodness! You can do that anytime you wake up! The Chairman could wake up today and say, ‘This is what we’re doing today!’ Why do we need a resolve clause for that? I didn’t know we needed to define the Chairman’s authority into saying what we’re gonna do today. He’s made it very clear for all year, this is what he wants to do!”

“The second one, ‘If a witness is called to testify, the committee staff…’ Here we are again! Because we know it looks more ‘impeachment-like’ if we have staff answer questions. I’ve never seen a majority who desperately want to give away their authority to staff to do something. This desperation to get staff to be in the spotlight to ask questions is something that is again, ‘Instagram filter.’ Let’s put it in there to look like something, but it’s really not,” Collins said.

He went on to number three and noted it was a problem for Democrats, and he explained why. “It talks about executive session and how they’re gonna handle information, but here’s the problem. They already promised in court filings that they had these procedures in place. In fact, I wrote a letter to the Chairman saying, ‘No, you really don’t.’ You don’t have these in place. Maybe they thought the judges would miss it while they had the TV cameras on. Judges you might want to look at this! They didn’t have the procedures in place. You may have a filing saying you did, but you don’t.” (Continued Below)

“The last one, this one is the most amazing!” Collins expressed. “We’ve been building up, 1,2,3,4. I am so happy that this resolution says the President’s counsel may respond in writing to information and testimony presenting the committee in open session, after the fact! Everybody in this room, everybody in this country, everybody outside of this country can do this. Anybody who has an email address, anybody who has a pen and paper can write a letter to this committee! We’re not telling the President he can do this? As if this President has a hard time expressing himself? I think he understands this and his counsel. Have we gotten to that point, really?”

The Georgia Congressman concluded, “The Instagram filter is applied, make sure it looks good, spruce up the parts, make your story look good. I’ve been wanting to say this for a long time, ‘Welcome to fantasy island!‘ [Be]cause we’re here! It may all look good, but the unfortunate part is when the screen goes down, you just see a simple procedure issue that doesn’t do with ‘impeachment.’ It doesn’t have to do with anything else. It just simply gives another press release for whatever we’re doing now.” [Emphasized].

Today’s ambiguity is a product of the chairman's own making because there is an easy way to know exactly whether this committee is in #impeachment proceedings: It’s called a vote. A vote of the full House of Representatives. pic.twitter.com/S5gRonopan

Democrats followed the yellow brick road, and now they’re fully lost in impeachment Oz—try as they might, they can’t find their way out of the mess they’ve made because they think “words don’t matter.” pic.twitter.com/HIfzf14MzM

(Related: Collins Slams Nadler In A Letter For ‘Promoting A Wildly Inaccurate Narrative’ On The Mueller Report)