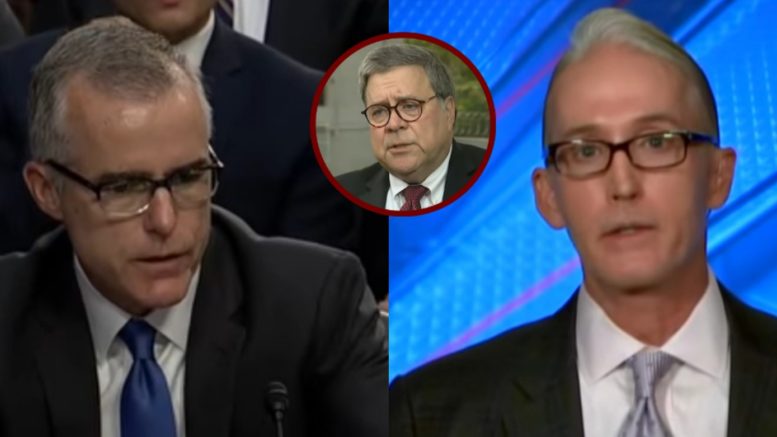 On Martha MacCallum’s Thursday program, Trey Gowdy had a “two-fold” response while giving his reaction to news that that Department of Justice rejected Andrew McCabe’s appeal to have charges dropped against him.

Gowdy said that the matter could be looked at as a both a “celebration of our justice system,” but on the flip side, he wanted to remind viewers that McCabe is presumed innocent until proven guilty and deserves such respect until the process is seen out.

In his reaction, Gowdy said, “It’s a celebration of our justice system, where you can be the second in command of the world’s most premier law enforcement agency and still be subject to investigation and, potentially, indictment.”

He added, “Whether you are second in command at the FBI or working the second shift at a manufacturing plant in South Carolina, the blindfolded woman doesn’t care who you are. And that’s something to be celebrating for.”

Gowdy went on to give the “wildly unpopular part” of his reaction to McCabe getting denied by the DOJ as he stated, “He’s presumed innocent.” Video Below

“And I know that’s not popular to say in a political context — it’s not — but he’s presumed innocent,” Gowdy continued. “And even if he’s indicted, the indictment is no evidence of a crime.”

“He’s entitled to present his case in front of twelve of his fellow citizens — and look, I know politics doesn’t reward fairness, but our justice system needs to survive long past the political vagaries,” he proclaimed.

“And it is important, just like it was with President Trump. I was very tough on Democrats, like Adam Schiff, that wanted to put him in jail before the Mueller report had ever been issued,” Gowdy declared. Video Below